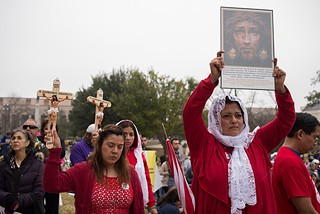 Sylvia Arpero (r) holds a sign to signify her stance against abortion at the Texas Rally for Life event Jan. 26. She is joined by cross-bearers Soledad Barcenas and Hortencia Reyes. (Photo by Sandy Carson)

› After only lifting the last burn ban on Jan. 9, on Jan. 29 Travis County commissioners reinstated it until Feb. 27, citing low humidity and high winds.

› All Travis County property taxes are due on Jan. 31. After that, interest will be charged at 7%, calculated monthly.

› The deadline for priority transfer applications in Austin ISD is Jan. 31. There are 32 AISD schools frozen to transfer for the 2013-14 school year and another 17 being monitored. For the list, visit www.austinisd.org.

› Environmentalists and city staffers on Wed­nes­day marked the 30-day countdown to March 1 – the day Austin's single-use bag ban takes effect at grocery and other retail stores.

› The Workers Defense Project and the University of Texas released "Build a Better Texas: Construction Working Conditions in the Lone Star State," a study that notes conditions are rough for Texans working in construction: One in five have had a work-related injury, and low pay and payroll fraud are rampant.

› Capital Metro reports 34 million boardings in 2012, an increase of 1.5 million trips over 2011. It outpaces the national public transportation growth rate of 2.6% for the first three quarters – Cap Metro grew at a rate of 4.7%.

› Gov. Rick Perry hit the fiscal Republican talking points in his Jan. 29 State of the State address, promising to overhaul the budget process with extra restrictions on spending growth. However, there was a surprising omission, with no talk of "fetal pain" legislation. See LegeLines online: austinchronicle.com/legeland.

› Calling the four decades of safe and legal abortion under Roe v. Wade a "tragic time in our nation's own moral wilderness," Gov. Rick Perry on Saturday spoke to a crowd at the annual Texas Rally for Life at the Capitol and renewed his call to make abortion "a thing of the past."

› Texas freshman senator and Tea Party darling Ted Cruz is the latest Republican to file "repeal Obamacare" legislation. However, it seems as doomed as the 33 House GOP attempts to repeal the Affordable Care Act.

› Cementing their status on the lunatic fringe of U.S. politics, John Cornyn and Ted Cruz were two of only three votes in the Senate against confirming John Kerry as Secretary of State.