Council Split on How – and When – to Fund Housing 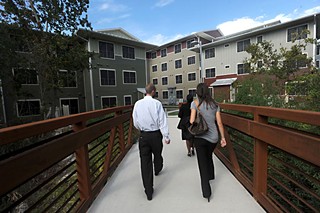 The November failure of a $78 million bond question that would have funded six years' worth of affordable housing efforts has made for some interesting times at City Hall. In the scramble to replace what activists and politicos alike would have double-underlined as a fiscal necessity, Council members took two actions: The first was a December resolution (courtesy of CMs Laura Morrison and Kathie Tovo) pushing for a wide-ranging look at what the city could do on its own to fill affordable housing gaps; the second is a recent call from Mayor Pro Tem Sheryl Cole and Council Members Bill Spelman and Chris Riley for a fresh run at the ballot box.

In December, the Morrison and Tovo action called for City Manager Marc Ott to scour city books and "identify between $8 million and $10 million in potential resources that would allow the City to realize near-term opportunities for affordable housing projects and programs." Such programs, suggested the resolution, could include as much as $4.5 million for a program that, through the Texas Department of Housing and Community Affairs, could bring back as much as $30 million in federal tax credits for housing. Both figures have since dropped. But the March 1 deadline remains.

That all illustrates the gaping immediate need left behind by the failure of the affordable housing question. Ending Community Homelessness Coalition Executive Director Ann Howard is at the forefront of Austin's affordable housing efforts. "We'd use bond money for [the TDHCA program], but we don't have any," Howard says.

When the recommendations come from Ott – expected this week – the hope is that city management will be able to find a source or method that could allow the Council to pull from internal resources to make up for lost bond dollars. Bond initiatives are typically spread out over six years. Do the math, and the Morrison/Tovo resolution could be as much as $5 million short of the annual $13 million that would have come via ballot bonds.

As part of this effort, Council members could look to beef up the Affordable Housing Trust Fund. The fund was set up to draw property tax funds – 40% of taxed value – from Downtown buildings built after 1997, but sometime in the mid-2000s, city staff decided to shift collections to only city-owned properties. That change has shorted the fund, and, by extension, affordable housing programs. Howard puts it simply: "It's either underfunded or it's never going to be the fund we need it to be."

The internal route would not be as risky as a bond request. Should the city manager find the money, and figure out a way to make it available annually, it would spare affordable housing advocates the sort of embarrassment – and fiscal shortfall – brought on by another negative vote.

Despite the freshness of that latest wound, at least three Council members are ready to go back to the ballot. On Jan. 12, Cole, Spelman, and Riley joined affordable housing advocates at a rare weekend press conference. In remarks she made, Cole focused on the needs of the community and the power of leveraged funding. "We're developing a strategy to address affordable housing in the short, intermediate and long term that is both focused and voter-supported," she said. "By taking forward steps on a bond addressing critical housing needs, including those for women, children, veterans and the disabled, we will be ensuring that we have a successful strategy that matches our community's values."

No one has yet put anything on any ballot. But on Jan. 17, Council members approved another set of instructions for Ott. This time the city manager was directed to "identify and take preliminary steps" toward a future affordable housing bond question. The date remained ambiguous.

In a true rarity, Morrison – a longtime supporter of affordable housing initiatives – expressed a handful of concerns about the resolution. She told her colleagues that she wanted to be sure that approval of the resolution wouldn't result in "papers being filed." She told the Chronicle that she's "really hesitant" to endorse a 2013 bond – especially if the Council hasn't yet looked at the larger picture.

For his part, Council Member Mike Martinez later told the Chronicle that he did not believe that it was appropriate to "call for an election 60 days" after the voters said no. "I think we [will] need to at some point, and at some point, I think we will," he continued.

The fact that a new bond election would come only a year after voters declined to support a very similar package is, to say the least, politically problematic. Still, bond supporters could try and clear this hurdle by painting a 2013 bond in a different light ("OK, you said no to that, but what about this?").

Howard echoes that thought. "We are grateful that leaders want to lead on affordable housing," she says. She also notes that the affordable housing community needs "it all" – whatever funds the city can dig up internally, or through another bond election. That points to another fact: Until the city has a comprehensive picture about how it will fund affordable housing – something that all interested Council members seem to be pressing for – it may be hard to sell any one piece of it.