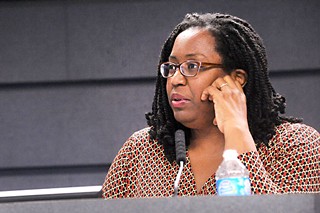 Single-sex education: It's the new "separate but equal."

On Monday night, Austin ISD's board of trustees took the district further down that path by adding three single-sex schools, starting in the 2014-15 academic year.

The biggest leap of faith – or jump into the abyss – comes with the decision to combine the attendance zones for Pearce and Garcia middle schools, then split them along gender lines. This was the brainchild of District 2 Trustee Cheryl Bradley, who has presented the new-look campuses as safe havens for minority teens during puberty (see "AISD, Single Sex, and the Shadow of Separate but Equal," Aug. 9, 2012) Two months ago, when the board addressed the bulk of the Annual Academic and Facilities Recommendations, it seemed that the Pearce/Garcia plan was dead, only to be unexpectedly resurrected by Board President Vince Torres. Going into the Jan. 28 board meeting, there was no clear consensus on moving forward.

In an unexpected move, At-Large Trustee Tamala Barksdale joined Bradley, Torres, and trustees Amber Elenz and Lori Moya in voting for it. Trustees Ann Teich, Jayme Mathias, and Gina Hinojosa – the three members elected last November in the backlash against the district's more heavy-handed reforms – all voted against. (Trustee Robert Schneider was absent.)

The real question now is whether the administration and the board were ever serious about any other model: Even though there is little evidence to show that single-sex schools help students learn – and in fact plenty of contrary evidence that they reinforce gender stereotypes – no "Plan B" was ever presented. There are also implementation questions, like how to transport students from the attendance zone who do not want to attend a single-sex school. (Moreover, the district has yet to provide meaningful answers about the place of transgendered students on single-sex campuses.)

The third campus approved – and the district's fourth gender-divided school – is the proposal for a boys' magnet academy for grades 6-12. The most likely location is the old Anderson campus, now home to the district's Alternative Learning Center. The board has warned that the district needs what Mathias called "a brother school" to the Ann Richards School for Young Women Leaders: Without it, the district risks a Title IX equity lawsuit. This time, it was Barksdale who blanched, due to the potential cost: While there is an initial setup grant from the Moody Foundation, the district must cover $7 million a year in operating costs, and the ALC would need a $20 million renovation. That will likely come before voters in May as part of the planned bond package in Proposition 4, $144 million for Academic Initiatives, Fine Arts, and Athletics. Barksdale finally joined Hinojosa in voting against the plan, but it passed 6-2.