Then There's This: Light and Air 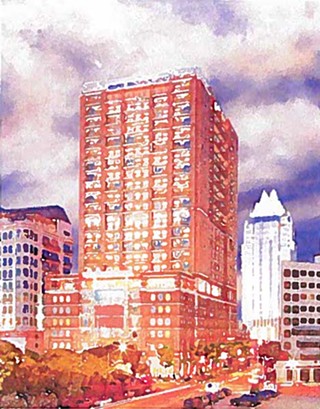 Downtown residents welcome the arrival of this Gables multifamily project and Hotel ZaZa on Fourth Street, between Guadalupe and Lavaca, but the neighboring Plaza Lofts (at left) opposes its parking structure.

Austin native John Joseph has spent more than three decades of his legal career as a lawyer for developers. Recently, though, he's temporarily moved outside his comfort zone to represent residents of the Plaza Lofts, one of Downtown's first residential towers to spring up in the early 2000s, at the beginning of the condo boom. The subdued, 60-unit building with expansive windows and balconies sits just across from Republic Square at Fifth and Guadalupe streets.

The south side of the condo faces Fourth Street, where Gables Residential plans to build a 24-story tower that will house 226 multifamily units and a 160-room Hotel ZaZa, a boutique hotel operation looking to build on its successes in Dallas and Hous­ton. The Gables project, which will also include restaurants and retail, will replace the former home of the Ginger Man pub (now located on Lavaca) and what is now a surface lot, once occupied by the Water­loo Brew­ing Co., and later the Fox & Hound tavern.

Gables requires a zoning change for the additional height allowed in this area, and is set for a City Council hearing and possible action on Feb. 14. The neighbors don't have a problem with the added height – in fact, they say they welcome the density and would prefer a tower that was even taller and skinnier. What the neighbors don't like is the planned 500-space, six-level above-grade parking structure that would sit across a 20-foot alley from Plaza Lofts. There are other concerns as well, such as amplified music on the pool deck, but Plaza Lofts' attorney Joseph has narrowed the argument to a matter of light and air: residents' diminished light by day, flashes of vehicle headlights at night, and car exhaust fumes at all hours.

"We want to give the developers some assurance that it's not a moving target," he said of the residents' concerns. "We really are interested in light and air. The bottom line is, the residents do not oppose Hotel ZaZa and they don't oppose the Gables apartments – they think it's a wonderful use of that property. We just want them to consider the concerns of residents who have been Downtown so very long."

Though Gables' attorney Richard Suttle has indicated that his client is already locked into a design that would be too costly to change, Joseph believes the parking issue can be reasonably resolved with some design and engineering adjustments.

The Planning Commission voted unanimously Jan. 8 to approve the zoning change for the additional height (that decision doesn't affect the parking structure), but commissioners expressed sympathy with those residents who could spend the rest of their Plaza Lofts days staring out at a concrete parking garage. Nonvoting member Jeff Jack, however, argued that the city should push Gables to give more than what it's getting in return for the added density – an energy-efficient development, and street and sidewalk enhancements to complement the city's Great Streets program.

"We're giving them an extra 141,000 square feet of space," Jack said. "Can't we ask them to do something to make the quality of life better for their neighbors?"

Plaza Lofts residents found a similarly sympathetic audience at last week's meeting of the Downtown Commission, which moved to encourage Gables to reduce the number of parking spaces and change the design of its parking setup, as well as address residents' concerns about noise from a proposed pool deck.* The commission outlined its recommendations in a letter to Council. The meeting threatened to go off the rails before the vote, however, when commission Vice Chair** Heather Way sought to add an affordable housing requirement to the measure. Suttle groused about the sudden shift in gears, member Mandy Dealey said the commission didn't have the power to make such a requirement (indeed, the DC is advisory only, but can recommend actions for Council to take). Another member wanted to address the amplified music concerns, while others noted their preference of sticking with the concerns of the project's neighbors. Way withdrew her motion, but the final vote was confusing enough to compel Joseph to request a transcript.

The parking issue on the Gables project is just one more talking point to add to the city's ongoing discussion about minimizing parking to encourage more people to use other modes of transportation. In fact, a debate over a Downtown hotel proposal that includes no designated parking is due for consideration at Council's next meeting on Jan. 31 (see "Hotel Project Sparks Downtown Skirmish," Jan. 18). Suttle, on the other hand, argues that project developers never get fired for having too much parking, but they do if there's not enough.

Opposing attorney Joseph believes the issue is not so much about too much or too little parking, but how Downtown residential buildings and hotels can be built in such a way that doesn't diminish the neighborhood's quality of life. "If we're going to encourage more people to live Downtown, then we need to take into consideration how they live," he said. "Otherwise, we're sending a message to people that once you're down there, you're on your own."

*A previous version of this story stated the Downtown Commission "blessed the plan" with an amendment to address parking concerns. Rather, the commission did not approve the plan but moved instead to recommend to Council that Gables address the parking and noise concerns of the Plaza Lofts neighbors. Also, Heather Way was erroneously identified as chair of the Downtown Commission. She is vice chair and was filling in as chair at this meeting. 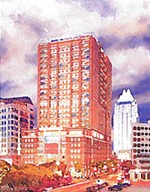