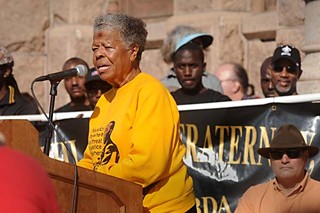 • President Barack Obama was ceremonially inaugurated for his second term this week, embracing an activist heritage: "We, the people, declare today that the most evident of truths – that all of us are created equal – is the star that guides us still, just as it guided our forebears through Seneca Falls, and Selma, and Stonewall."

• Also on Inauguration Day, Austinites celebrated Martin Luther King Jr.'s birthday with the annual public service day, a march from the UT campus to the Capitol and then Huston-Tillotson Uni­versity, closing with a festival at the H-T campus.

• News broke Wednesday morning that Amado Pardo, patriarch of Jovita's Tex-Mex restaurant and music venue, had died, less than a month before he was slated to stand trial in federal court for his alleged role as a kingpin in a South Austin heroin ring. Pardo had cancer, one of the reasons his attorney sought last year to have him released on bond pending trial. That request was originally denied but was reconsidered Jan. 14, and Pardo was released because of his declining health.

• No City Council meeting today (Jan. 24), but Council will have plenty on its plate next Thurs­day: a couple of contentious zoning cases, what to do about outdoor amphitheatres (everybody wants to be an entertainment mogul), and probably some fussing over the 10-1 redistricting process. See "Council Preview: Audibles and Delays of Game."

• Council may be considering bringing a new housing bond before voters. Even though voters rejected a $78 million request for affordable housing last year, council members have instructed City Manager Marc Ott to draft a timeline for another measure.

• Election season starts now. On Jan. 23, senat­ors drew lots to see who, after redistricting, gets a two-year or a four-year term. Out of the four senators whose districts include Travis County, Kirk Watson, D-Austin, and Donna Campbell, R-New Braunfels, will be on the 2014 ballot, while Troy Fraser, R-Horseshoe Bay, and Judith Zaffirini, D-Laredo, are safe until 2016.

• The UT board of regents may ask the Texas Legislature for $1 billion in construction bonds, including a proposed $98 million engineering building for the campus.