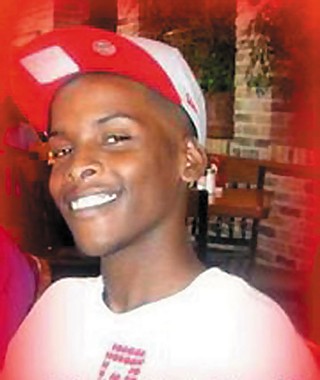 The official version of what happened on the evening of May 30, 2011, the night that Austin Police Department Officer Nathan Wagner shot and killed 20-year-old Byron Carter goes like this: Wagner and his partner, Officer Jeffrey Rodriguez, were on foot patrol – looking for drug dealers and car thieves near the East Sixth Street entertainment district – when they spotted Carter and his friend, a juvenile named Leyumba Webb, walking across a field near I-35 toward an apartment complex on East Eighth Street. The cops thought the pair suspicious, so they followed them. They briefly lost sight of the youths, who had gotten in a car parked along the curb on East Eighth. Shortly after the officers located the pair, the car – driven by Webb – suddenly lurched into the street, heading directly for the two officers. Rodriguez went down, hit by the car (his Achilles injured, officials later said), so Wagner thought, according to court records. "Fearing for his life and the life of his partner," Wagner drew his weapon and fired five shots into the car.

All five shots entered the car and hit Carter, killing him. Webb was grazed by a single bullet; he hastily drove off and dumped the car just blocks away.

Attorney Adam Loewy, representing Carter's family in a federal civil rights suit brought against Wagner, insists the official story is not what actually happened. But he says he's hamstrung from making that case because the city refuses to allow key pieces of evidence – including the Internal Affairs investigation and the report from the police monitor – to be publicly released. And if they can't be released, he can't effectively argue against a motion for summary judgment filed by Wagner's attorney, Robert Icenhauer-Ramirez, seeking to have the lawsuit dismissed.

The documents in question are generally precluded from public release under state law. Civil service law provides that IA investigations that don't result in discipline are confidential. The contract between the Austin Police Department and the city similarly forbids disclosure of a report on the case from the Office of the Police Monitor, the city argues. Wagner did not face any administrative sanctions as a result of the shooting, and a Travis County grand jury declined to indict him on criminal charges. Still, the Statesman reported last year that after reviewing the IA investigation, the city's Citizen Review Panel concluded that Wagner should have been fired. Loewy argues that details from the CRP's findings need to be included in his motion arguing that the case should not be dismissed, but should go forward to trial in July, as currently scheduled.

Loewy says the city's account of what happened the night Carter was killed is all "lies." As Loewy tells it, the officers followed Carter and his friend simply because they were black. Rodriguez's Achilles was not injured, nor was he thrown to the ground, and the IA investigation contains "admissions that suggest the police officers in this shooting knew they acted inappropriately," Loewy wrote in a Jan. 9 motion seeking to have the IA and police monitor documents publicly filed.

At issue in part is that the city has agreed to release from a protective order documents that Icenhauer-Ramirez used to file his motion for summary judgment, including a deposition of Webb. Using that document in tandem with portions of Wagner's deposition in the case, Icenhauer-Ramirez makes the case that Webb agreed that he drove the car in a way that put Wagner and Rodriguez in danger; as a consequence, there are no fact issues left for a jury to determine, meaning the case should be closed now. "There is no genuine issue as to the material facts in this case," Icenhauer-Ramirez wrote in a motion for summary judgment filed in late December. "Because Officer Wagner had probable cause to believe that the car being driven at him and Officer Rodriguez ... posed a serious risk of physical harm or even death to himself and to Officer Rodriguez, Officer Wagner's use of deadly force in this case was not objectively unreasonable."

Loewy disagrees, but says he can't respond in detail because to do so he has to reference confidential material, meaning his filed motion would read like a piece of Swiss cheese. Both Icen­hauer-Ramirez and the city argue that's nonsense in motions opposing the documents' public release. The opinions of Police Monitor Margo Frasier and the members of the CRP are "merely lay opinions" and not relevant to the question of whether Wagner was justified in shooting Carter, the city argues. The only real reason that Loewy is seeking their release is to afford him an opportunity to "harass City officials in the press," attorney Daniel Richards wrote in the city's motion.

Loewy notes that he could file a heavily redacted version of his motion, but that makes it difficult for Judge Lee Yeakel to review. He argues also that by allowing Icenhauer-Ramirez to refer to documents previously sealed, but not allowing him to respond in kind, enables the city to "control the narrative" of the shooting – leaving the impression that the police acted appropriately in shooting the passenger in the car five times, killing him. "[T]his underlying action involves the public safety of the general public and the alleged abuse of deadly power by an Austin Police Department officer," Loewy wrote to the court. "Thus, because this matter is directly connected to the safety of the general public from abusive and deadly actions taken by a public officer ... the presumption of public access to this judicial proceeding and its records outweigh any potential injury to the City of Austin."