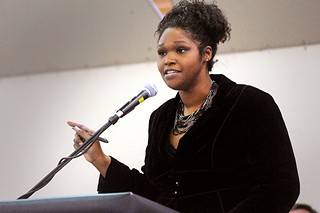 Over the last few years, the Austin Inde­pendent School District has worked hard at longer-term financial planning, building this year's budget with the next in mind. But with school finance reform set to dominate not just this Legislative session, but special sessions and maybe the 2015 session, too, district staff may have to keep all their calculations on the back of an envelope for a little while longer.

In 2011, the Legislature gutted public school spending by $5.4 billion, meaning a $60 million cut in state funding for AISD. This year, they are offering a minimal gesture of apology: a commitment to track enrollment growth. That's what Speaker Joe Straus has pledged, and that's what's in the two draft budgets, Senate Bill 1 and House Bill 1. However, there's no indication lawmakers will restore what they cut last session. That's the most generous proposal: Gov. Rick Perry raised eyebrows by saying that Texas school funding is "phenomenal," and Lt. Gov. David Dew­hurst told the Texas Public Policy Foundation that his sole suggestion for extra cash involves gun training for teachers.

AISD Chief Financial Of­fic­er Nicole Conley-Abram has moved the start of the budget-building process from late spring to early February so she could build all the Legislative options into her projections. "Right now," she said, "it looks like the scenario would be just sticking with the status quo." Her optimistic take is that, at bare minimum, the district will not endure any further cuts. She said, "The hope is that things will get better and not necessarily get worse, but that's a huge assumption."

So what do this year's initial proposals mean for AISD? On Jan. 14, school finance consultants Moak Casey & Associates made a presentation to the AISD board of trustees – or, as Board President Vince Torres called it, "a reading of the tea leaves." They posited two extreme funding models: If there's no funding for enrollment growth, AISD could see another $19 million cut across this next biennium; if the state reverses course, restoring the cuts and fully funding enrollment growth, that would be worth an extra $58 million. Lawmakers seem likely to pick something between those figures but, according to the district's director of intergovernmental relations, Edna Butts, it's far too early to know what option they will select. However, she said: "In some respects, it won't be as bad as last session. We don't face the same funding situation, but there's still a lot of challenges."

The first is the 8,000-pound gorilla in the middle of the room: the multiple lawsuits against the current school finance system. Judge John Dietz is expected to rule from the bench after closing arguments on Feb. 4, and issue his formal written opinion within a month. Whatever Dietz does, Butts said she expects the losers to make a direct appeal to the Texas Supreme Court: "There seems to be a consensus from everyone that works in school finance and education that the Legislature will wait until the Supreme Court rules, so there'll probably be a special session in spring or summer 2014."

While that means AISD will still labor under the same "Robin Hood" recapture system that sees them annually send over $100 million to the state for at least one more year, it gives Conley-Abram a little breathing room. With little sign of serious state relief, the district will hold a tax rollback election this November. Last year, the board approved a long-delayed staff pay raise, paid for out of district reserves. If that increase is to become permanent, and with no state relief in sight, they need to increase taxes to pay for it.

However, while lawmakers seem unlikely to touch the funding formulas for at least another year, Butts suggested they could look at grant programs, like pre-K funding, the Student Success Initiative funding additional assessment test support for students, and the District Awards for Teacher Excellence covering teacher incentives such as AISD's REACH program. Butts said, "Those are things that the Legislature could act on in the session and not have to wait until the court rules on the school finance lawsuit."

There are also a host of bills that could directly impact how districts spend their money. For example, there's broad discussion about reducing the number of end-of-course exams – a big cost to districts. However, the biggest concern is the push from conservatives like Senate Education Committee Chair Dan Patrick, R-Houston, for school vouchers. Butts said, "If the Legislature is not going to restore funding that we lost last session, but yet they're willing to take state money and put it into private schools, it further erodes what public schools are able to do for children."

There is some room for optimism. It's not the $8.8 billion reported surplus – that goes straight into a supplemental appropriations bill to pay for existing Medicaid commitments, a $2.3 billion payment from the Permanent School Fund deferred from the current biennium to the next, and a $1 billion shortfall at the Texas Education Agency. However, there's also $6 billion in unallocated funds in HB 1, plus $11.8 billion in the Rainy Day Fund. In his AISD briefing, finance consultant Dan Casey warned trustees that they are competing with many other interests: The Texas Department of Transportation calculates it needs an extra $4 billion a year for congestion and maintenance, and Dewhurst is pushing hard for water infrastructure investment. Those needs will be balanced against issues like full day pre-K funding, which schools see as a vital and cost-effective way to prepare kids for school. While there will be a fight over priorities, Butts said, "I think it's hopefully opening the door to the Legislature taking a broader vision of investing resources for the long term."