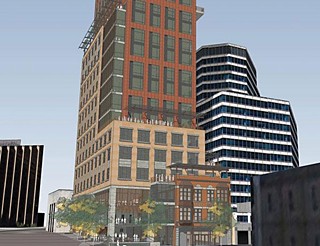 An unusual battle over a proposed hotel complex at Eighth and Congress is finally making its way to City Council today (Thursday). The city's development process has rarely been criticized for its swiftness, but the saga of the "Austin House: The Hotel of Texas" has taken a particularly leisurely path through the city's many boards and commissions. The initial rezoning request was made in September 2011, and the case finally arrived at Council for the last meeting of 2012 (Dec. 13), when developers promptly requested an "indefinite postponement." They were informed no such procedural animal exists, and were instead granted a holiday reprieve.

Developer David Kahn is seeking a zoning change in order to build a 28-story project that promises a 210-room hotel, 110,000 square feet of office space, a music venue, restaurant, and retail shops on the ground level of the site (currently home to the Hickory Street restaurant, which supplanted Hickory Street Bar & Grill). The project will encompass the historic Bosch-Hogg building next door, preserving its facade. With a price tag of about $90 million, Kahn estimates the finished project will bring over $3 million in annual city tax revenue.

For someone hoping to build a multimillion dollar project, Kahn does a fairly convincing job of portraying himself as an everyman oppressed by forces far more powerful. In his presentation to the Planning Commission, he flashed a slide of the monocled, top-hatted "Rich Uncle Pennybags" of Monopoly fame when discussing his opponents, calling out Downtown real estate heavy-hitters Thomas Properties and Tom Stacy as the sources of the vocal opposition from the Downtown Austin Alliance.

"I really think that it's all about our office building. If we were not building an office building, One American Center [Sixth & Congress] would not be spending money to protest this," said Kahn. "It's all about their private views." (The site is not in a state-protected Capitol View Corridor.) 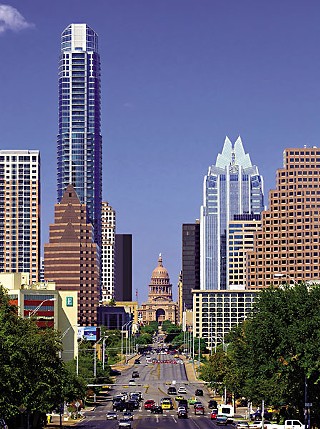 Certainly, it's unusual for the DAA to oppose Downtown development – indeed, rare to see any of the many large-scale projects that pass through City Hall not gain DAA endorsement. What makes this project different? The major bone of contention is the fact that the proposed design would violate the 60-foot setback requirements on the west side of Congress (which require buildings to step back 60 feet from their facades after the initial 90 feet). Kahn proposes a tiered design that would step back 15 feet after the first 45 feet of facade, then another 15 feet after an additional 45 feet of elevation.

In September 2011, the board of the DAA unanimously agreed to support the zoning change and the increased floor-to-area ratio (which allows greater height). But they opposed any variance to the setback – a stance that has remained firm. The DAA warns that violating the setback would be catastrophic, because the resulting competition for Capitol views would eventually create a narrow canyon from Lady Bird Lake to the Capitol Building. They even have a rendering that Kahn says is exaggerated "to get everyone real fired up."

The DAA fears are not without foundation. On the east side of Congress, the unofficial setback practice quickly went to hell after the 1975 construction of the Bank of America Tower, which DAA Executive Director Charles Betts calls "the black building." Indeed, the BoA Tower inspired the Congress Avenue Overlay, a development plan approved unanimously by City Council in 1984. Since then, the overlay and its required setbacks have been observed on the west side of Congress. (The DAA mockup used to illustrate the visually dystopian horror that awaits Downtown was created by mirroring the east side of the avenue onto the west.)

Meanwhile, the Downtown Austin Neigh­borhood Alliance has endorsed the project, saying that it would activate a key part of Congress Avenue while preserving the facade of the historic Bosch-Hogg building. DANA is careful to state that its support of the project does not indicate a blanket acceptance of relaxing the Congress Avenue Overlay. Instead, they stress that encroachments into the setback should be evaluated on a case-by-case basis, in accordance with DANA's reading of the recently passed Downtown Austin Plan. Kahn points out that the plan suggests the city consider relaxing the 60-foot setback, acknowledging the impossibility of developing the west side under current standards.

City staff agrees with Kahn's reading that a 60-foot setback is "greater than necessary to protect the historic character of Congress Avenue" and goes on to suggest that building additions to historic structures be stepped back 15 feet from their facades – which is in line with the hotel proposal. Opponents respond that the overlay remains in effect as is.

As if that isn't enough to raise sand at Council, plans for the hotel include no on-site parking. Kahn argues that parking is easy to come by on North Congress at night, including leased spaces in lots and regular street parking. Critics find his logic maddening: If the hotel will wake up the area, won't that mean a parking crunch will soon follow? Yet with the city already contemplating the eradication of parking minimums in the Central Business District – spurred by the planning argument, among others, that subsidized ("free") parking discourages pedestrian-oriented development – this may not be the sticking point it would have been just a few months ago. In any case, Kahn maintains that he will find parking off-site (he told the Planning Commis­sion it would be "suicidal" to spend $90 mil­lion on a project and not provide parking).

As the case heads to Council, it's almost an even score from the boards and commissions, with support from city staff, the Downtown Commission, and Design Com­mission, and opposition from the Planning Commission and Historic Landmark Com­mission. Add a petition signed by some of Austin's most powerful citizens, and you get what promises to be a discussion much livelier than the current street life on North Congress Avenue. 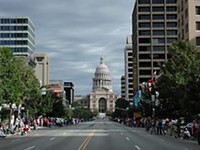