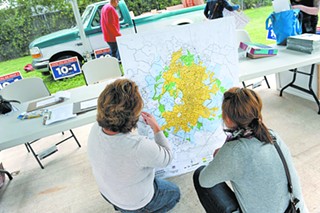 Two Austinites check out a map of the city at a rally in support of 10-1 districting in October 2012. (Photo by John Anderson)

Though it had been scheduled to end last week, just before that deadline the city auditor's office extended the public comment period on the city's new City Council 10-1 redistricting process to Wednesday, Jan. 16. City Auditor Kenneth Mory noted that this could be done without impacting the broader timeline – so why not get as much public input as possible?

Austinites for Geographic Represent­a­tion already had its comments posted and available for public viewing. The group not only spearheaded the 10-1 campaign, it also wrote the charter amendment that will govern the formation of the independent Citizens Redistricting Commission – the group ultimately responsible for drawing district lines. AGR has also formed an advisory committee to monitor the process. Last week, the group sent a nine-page letter to the city auditor's office, suggesting four changes to the current interpretation of the law.

Most significantly, the letter calls for the voting requirement to include May and Nov­em­ber elections in tallying whether applicants to the districting commission have voted in the last three out of five "City of Austin general elections" – charter language that could be construed to mean only the May municipal contests. Roger Borgelt, Travis County Republican Party vice chairman and co-chair of the AGR Advisory Committee, explained, "AGR intended to include those [November] elections. ... We want to make sure that the people who voted for CD 10-1 are getting a chance to participate in the process of drawing district lines."

But will they? In its letter, AGR cites an analysis done by Opinion Analysts that estimates this change would just about double the pool of qualified applicants (from 35,418 residents to 68,627.) The report also shows a potentially troubling lack of diversity in the pool – for example, a pool of Hispanic voters that is about 10% if only May elections are counted, and just under 12% if both elections are counted. (The effects of other criteria remain to be seen.)

AGR's letter also calls for the panel of aud­itors to ensure that the applicant pool reflects the diversity of Austin, that party precinct chairs be qualified to serve, and that the three auditors (who will assess the applicants for the CRC) be paid for their services.

Mory said that he had seen the letter, and that he was "still considering some of the points on there." He anticipates some changes, but declined to get into particulars during the public comment period.