Then There's This: Solar for Lease

It just got easier for nonprofits to go green 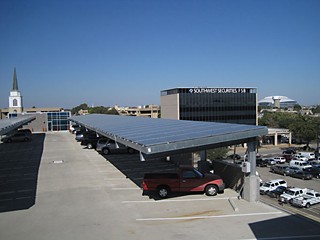 Meridian Solar is building a solar-powered parking structure at LifeWorks, similar to this one at UT-Arlington. (Photo courtesy of Meridian Solar)

With very little fanfare, the City Council last month approved the first solar-lease project – an innovative financial model that allows nonprofits, schools, and other cash-strapped entities to reap the benefits of solar without busting the bank to pay for it. The Council's decision could have a far-reaching impact on the city's energy future – possibly adding tens of thousands more power-generating solar panels to rooftops across 437 square miles of Austin Energy's service area.

LifeWorks, a resource organization for young people and families, is the first nonprofit to become eligible for performance-based incentives through a new solar-lease arrangement with Meridian Sol­ar, an Austin-based installation company. Now other nonprofits, churches, schools, and government agencies – entities that are neither flush with cash nor eligible for federal solar tax credits – are exploring similar solar-lease agreements with AE-approved vendors. Some have advanced as far as the Council's Jan. 17 agenda, which includes proposals that would provide performance-based incentives to affordable housing communities owned by Foun­da­tion Communities and the city Housing Author­ity, as well as two Goodwill Industries facilities.

PBIs used to be cold, hard cash rebates, but after Austin Energy exhausted its solar rebate budget for commercial and nonprofit organizations a few years ago, the utility hit the pause button in 2010 and crafted the PBI plan, paying 14 cents for every kilowatt-hour of energy churned out by a solar system for up to 10 years. That's when solar became cost-prohibitive for nonprofits, which had previously relied on up-front rebates to help finance their systems. So the utility spent the next two years trying to the figure out how to get nonprofits back on board.

Under the new financial model, LifeWorks is installing a fairly extensive photovoltaic power generation system at its Sooch Foun­dation Youth & Family Resource Center, which opened last year at 835 N. Pleasant Valley, near Austin Community College's Eastview Campus. Lifeworks' Chief Operating Officer Mitch Weynand said they started reviewing solar options during construction of the East Austin facility, in trying to make it a five-star green building. Merid­i­an had put forward a proposal to install a 276,000-kilowatt array on top of the three-story building and a covered parking structure. The nonprofit wanted to go big on solar, except there was one major obstacle: a lack of funding.

"LifeWorks didn't have the money to just buy the equipment, so that's when the seeds of a leasing arrangement were planted," Weynand said. It turned out that AE had been looking at the same type of financial model. Now, with the blessings of the utility and the city, LifeWorks will lease the equipment for a 10-year period, with the goal of purchasing it with financing gained through energy savings and funding from the PBIs, which is estimated to cover more than half the $660,000 project.

Tim Harvey, conservation programs specialist for the utility, sees the new arrangement as a win-win for both nonprofits and AE's entire electric delivery system, particularly during peak demand periods of long summer afternoons. "The nonprofit benefits because the meter rolls back – it's called net metering – when the solar's producing. They're able to use the power, and it reduces the need for them to use the power from the electric grid," he said.

For years, Foundation Communities was a leader on the green energy front, but its pioneering solar endeavors were among those that halted when AE implemented the PBI plan. "That essentially broke the deal for us as a nonprofit," said Sunshine Mathan, the nonprofit's design and development director. Mathan, an active player in the solar community, worked with Karl Rábago, AE's former head of conservation efforts, to fashion a plan that would benefit nonprofits without hitting the utility's pocketbook. "It didn't really land anywhere, unfortunately."

Once the solar lease idea emerged, Mathan again set about trying to make the plan work for Foundation Communities. But while the lease agreement proposals are set for Council approval next week, Mathan says the nonprofit is still parsing the details and considering vendors. "We're not sure [the proposed agenda items] are going to go through," he said. "It's up to us to determine whether the financials work."

As for LifeWorks, Weynand says he's pleased his organization made the jump. He pointed to Meridian's precise breakdown of how Austin will benefit from the new system, once it's up and running. According to Merid­ian's calculations, the system will save about 253,417 kWh a year – about what it takes to power 22 average Austin homes. Taking that a step further, the savings are equivalent to planting nearly 4,000 trees or eliminating 29 cars from Aus­tin streets. As for air emissions, Meridian estimates LifeWorks' system will save 168 tons of carbon dioxide, 211 pounds of sulfur dioxide, 234 pounds of nitrogen oxide, and 163 pounds of carbon monoxide.

Put in those terms, it's easy to visualize solar and other renewable energy sources someday rendering power plants obsolete. Even in Texas.