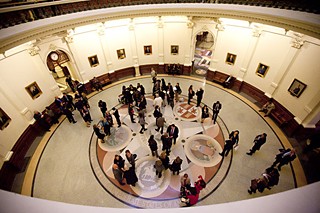 A view of the rotunda on opening day of the 83rd Legislature. See "Lege Opening Day: Users and Abusers" and our photo gallery. (Photo by Jana Birchum)

› As the new year gets rolling, the first regular City Council meeting is next Thursday (Jan. 17, work session Tuesday), with a brace of Austin Energy solar rebates for nonprofits ("Then There's This"), and some zoning cases from 2012 ("Council Preview: A Bar on Burnet?!?").

› Austin ISD trustees have revived their controversial plans to create three single-sex schools. These had seemed dead in December, with few tears shed in the community, but they returned at the Jan. 7 work session: a magnet boys' academy, funded in part by the Moody Foundation, mirroring the Ann Richards School for Young Women Leaders; plus turning Pearce and Garcia middle schools into twinned single-sex institution. In discussion, the board glossed over the lack of evidence for benefits of gender-based segregation.

› On Jan. 8, the Lower Colorado River Authority board of directors voted to request drought relief – withholding water from downstream farming – if severe drought conditions affecting the High­land Lakes do not significantly improve by March 1. The request requires confirmation from the Texas Commission on Environmental Quality.

› Travis County Commissioners discussed but didn't vote on a potential ban on gun shows at county facilities (Saxet Gun Shows are held regularly at the Travis County Exposition Center). After consulting privately with county attorneys, Judge Sam Biscoe cast doubt on the legality of such a ban.

› The 83rd session of the Texas Legislature began on Jan. 8 with splits among the Repub­lican leadership: Gov. Rick Perry talked about tax cuts and fetal pain, Speaker Joe Straus concentrated on education and transportation, while Lt. Gov. David Dewhurst has put water at the top of his agenda. See "Point Austin" and "Lege Opening Day: Users and Abusers."

› Comptroller Susan Combs' latest forecast predicts an extra $8.8 billion in revenue for the current biennium and $96.2 billion in the coffers for the 2014-15. Let the fighting begin.

› Responding to persistent criticism that the new state-run and funded Texas Women's Health Program is unlikely to be able to provide services to all women in need now that Planned Parenthood has been banned, the Health and Human Services Commission on Monday released a report that it says shows the program has the capacity not only to handle the clients, but also to expand. See "HHSC Says Texas Women's Health Program Just Fine Without Planned Parenthood," Newsdesk, Jan. 8.

› The U.S. Supreme Court this week rejected an appeal brought on behalf of Rosa Jimenez, sentenced to 99 years for causing the 2003 choking-related death of toddler Bryan Gutierrez, whom she was babysitting. Jimenez's appeal will now move back to federal district court for further proceedings. See "Supremes Reject Jimenez Appeal," Newsdesk, Jan. 8.