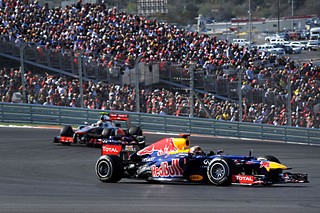 After much controversy, Austin hosted its first Formula One race in November. (Photo by John Anderson)

1) Wheels of Clay The heroic/anti-heroic saga of local legend Lance Armstrong came to an ignominious end, as the weight of evidence and testimony that the cycling king had doped – and organized his teams to do so – became overwhelming. He may remain a local hero for philanthropy, but his name carries a huge asterisk forever.

2) Police Monitor Between the New Year's West Campus slaying of Esme Barrera, the rare shooting death of an Austin Police officer in the line of duty, and the very public takedown of the Yassine Enterprises clubs, Chief Art Acevedo and his department drew plenty of attention this year. See "Top 10 Criminal Justice Stories."

4) Formula One No. 1 Despite much political controversy and anticipatory hand-wringing, the November Circuit of the Americas rollout was a tribute to the event, race fans, and the prep work of city and county agencies – dramatically reconfirming Austin's place among world-renowned cities, if not necessarily creating the bump that was anticipated for local businesses.

6) No IDEA One year after entering into a contract with IDEA Public Schools, the new AISD board of trustees decided to cancel that arrangement, citing poor results and continued neighborhood frustrations. See "Top 10 Education Stories."

8) So Long, South Lamar After decades of hosting such local gems as Ray Hennig's Heart of Texas Music, Bitch'in Threads, and the Alamo Drafthouse, the South Lamar Plaza shopping center cleared out this fall in preparation for a major makeover by developers Greystar and architect Michael Hsu. Look for the anchor Drafthouse to reopen in the third quarter of 2013, just in time for Fantastic Fest.

9) Leslie Cochran, R.I.P. In March, the longtime local icon and Downtown raconteur finally succumbed to years of life on the edge, having come to symbolize both Austin's "weird" uniqueness and the city's inability to fully address the homelessness issue, which continued to stymie local officials seeking both particular and comprehensive solutions. If the economy continues to improve, expect new initiatives in 2013.

10) Deadly Roads The number of traffic fatalities on Austin roads this year – 78 at the time of this writing – vastly surpassed last year's total (just 54) and our 10-year average of 60.*

Correction: A statistic about alcohol-related crashes has been removed. Official counts will be confirmed by APD after Jan. 31, 2013.