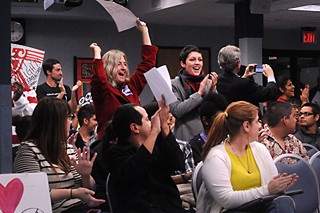 In their first meeting, the new AISD board of trustees voted to cancel its contract with IDEA Public Schools and approved an in-district charter in Travis Heights. (Photo by John Anderson)

1) AISD Board Shake-up In a brutal election that saw the birth of new pro-"reform" Astroturf group Austin Kids First, the Austin Independent School District board was overhauled, with four new members – Jayme Mathias, Ann Teich, Gina Hinojosa, and Amber Elenz – voted in on an agenda of better oversight and rebuilding community trust, and two incumbents – Sam Guzmán and Christine Brister – voted out.

2) Charters, Communities, and AISD The new-look AISD board of trustees flexed its muscles on Dec. 17, cancelling its contract with IDEA Public Schools to take over the Eastside Memorial vertical team, and approving a new in-district charter at Travis Heights Elementary. Both actions reflected the overwhelming support of the neighborhoods affected.

4) On the Lege Lawmakers are gearing up for the next session – and are again targeting education. Lt. Gov. David Dewhurst and Senate Education Committee Chair Dan Patrick, R-Houston, are both pushing for more charters, vouchers, and faster closures for troubled schools. House members may create a firewall, with Democrats and rural Repub­lic­ans fighting back against "reforms" that could cripple their school districts.

5) School Finance Lawsuits In 2011, the Legislature slashed the education budget to the bone, cutting $5.4 billion. Now Judge John Dietz is hearing six different suits, all of which argue that lawmakers ignored their constitutional obligation to fully and equitably fund public schools. Expect a ruling in early 2013.

6) Fading STAAR Will STAAR blink out? If the old TAKS tests weren't bad enough, the new State of Texas Assessments of Aca­demic Readiness have been an unqualified disaster, with lawmakers giving schools a year off accountability reporting, and the Texas Education Agency suspending the "15% rule," linking graduation requirements to end-of-course tests, for the second year in a row.

7) Progress in Pflugerville To the ire of Republicans and homophobes everywhere, in October Pflugerville trustees voted to make their ISD the first in Central Texas to offer domestic partner benefits to employees in heterosexual and same-sex relationships.

8) Fraud on the Border In the most massive student performance cheating scandal in Texas to date, in June El Paso ISD Superintendent Lorenzo García pled guilty to mail fraud for his efforts to hide his students' scores. In December, the TEA finally stepped in, dissolving the board of trustees and replacing them with managers.

9) Race to the Bottom Two years ago, Gov. Rick Perry announced that Texas would not apply for federal Race to the Top dollars – denying Texas schools up to $700 million. That left the field open for charter schools, and so this year Texas' IDEA Public Schools and Harmony Science Academy walked away with more than $29 million of public money each.

10) The $10,000 Degree In 2011, Gov. Perry challenged universities to cut tuition by offering a $10,000 bachelor's degree program. This year, several universities including Texas A&M and UT Permian Basin took up the price-cutting challenge. However, the deal covers only a limited range of courses, and tuition re-regulation may be back on the table at the Lege.