Death and drugs dominated the year for Austin police 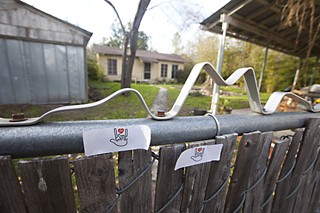 A part of the memorial in front of Esme Barrera's West Campus cottage, where she was killed on New Year's Day 2012 (Photo by Jana Birchum)

1) New Year's Murder The murder of music fan extraordinaire Esme Barrera, inside her rented cottage just north of the UT campus in the wee hours of Jan. 1, cast a pallor over the new year in Central Austin, where Barrera's enthusiasm for life touched many. As the year drew to an end, the investigation into her murder was officially closed, and police point to a strong circumstantial case that James Loren Brown was responsible for her death. He committed suicide in mid-January 2012.

2) APD Shootings On Good Friday, Austin Police Officer Jaime De Luna-Padron was killed by 24-year-old Brandon Daniel inside a North Austin Walmart. Padron was the first officer murdered in the line of duty since 1978, and Travis County District Attorney Rosemary Lehmberg announced in November that her office would seek the death penalty for Daniel. Just hours before Padron was killed, APD Officer Eric Copeland fatally shot Ahmede Jabbar Bradley after Bradley fled on foot from a traffic stop, renewing questions about whether a low-level traffic stop should warrant a foot chase.

3) Justice for Cisco The shooting of Cisco the dog by the APD became an international Facebook phenomenon and prompted the APD to say that it was reviewing its weapons policy concerning animals – prompting some outrage that a similar review hasn't followed the shooting of a person, including the then-recently deceased Bradley. The Cisco story took a darker turn when the credibility of his owner, Michael Paxton, became an issue after we discovered that he was the primary suspect in two serious hit-and-run accidents.

4) Undercover Dirk, Rick, and Dick We learned in September that APD had, beginning last year, posted at least three undercover officers to keep tabs on the doings of Occupy Austin. Whether their involvement also enticed members to use so-called "dragon sleeves" during a Houston protest last December is now an issue in court. Expect a resolution in early 2013.

5) Death Takes a HOliday The Texas death machine has taken a break for the holidays, but had us on our toes this fall, with near-weekly executions scheduled and most carried out. In all, Texas put to death 15 men in 2012. The state will kick off 2013 with the rare execution of a woman, scheduled for mid-January.

6) Arena Goes Home After nearly 13 years in prison for a crime that even the alleged victim now says never occurred, Michael Arena was finally released from prison in 2012. Arena was accused of sexually molesting his then-7-year-old cousin Stephanie, a crime she vociferously denies ever took place. Although Arena has not been officially exonerated, the state has agreed that he should not have to register as a sex offender.

7) Sixth Street Noir The three Yassine brothers – Mike, Steve, and Hadi – were the kings of Sixth Street. But their Downtown bar empire collapsed on March 22 when the feds, local law enforcement, and the comptroller's office knocked down their doors with drug, gun, and money laundering charges, as well as tax avoidance allegations.

8) Tex-Mex With a Side of Smack? Fans of Jovita's were stunned in June when Amado Pardo, the patriarch of the South Austin brand, was among 18 arrested and charged in connection with an investigation into heroin trafficking. Jovita's, the feds have said, was a longtime hub for heroin dealing in South Austin. Pardo remains in jail awaiting trial, slated for February.

9) Aces High APD Chief Art Acevedo marked his fifth anniversary this summer as the city's top cop. In that time, he's won the praise of cops and civilians alike – and is considered to be the most accessible and forward-thinking chief the city's seen, even in the assessment of some of his most persistent critics.

10) Yogurt Shop Case Still Needs Review The city's Public Safety Com­mis­sion in June passed a resolution recommending that Council fund the independent review of selected cold cases, beginning with the 1991 yogurt shop murders. The resolution was prompted by PSC member Kim Rossmo's concern that tunnel vision has infected the APD's investigation – a concern brought into stark relief when retired APD investigator Paul Johnson took the mic at the PSC's May meeting to excoriate Rossmo for suggesting the APD's investigation might have been flawed.