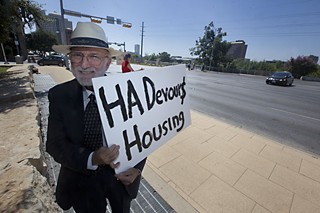 1) Districts! After seven tries over many years – and a bitter campaign between competing versions – Austin voters finally decided it's time to end the at-large Council system and elect 10 members from actual districts. Now the real fun begins – drawing-and-quartering followed by a whole new wave of 2014 campaigns.

2) May to November Romance Among several election changes, voters opted to move municipal elections from spring to fall because, like misery, voters love company – and the November turnout is several times that of May. Next question: Can we endure long ballots?

4) What's My Incentive? Council agreed to performance-based incentive agreements with Apple Inc., Visa Inc., and a couple of lesser players. The city (and state) argue that the jobs, economic returns, and wage and safety standards are a net gain; opponents insist it's a mug's game of corporate extortion and welfare.

5) Short-Term Reaction Among the hottest public arguments was the one over short-term rentals, by which homeowners rent out their houses for big city events – or maybe more. Council adopted rules that opponents call too weak and neighborhood-threatening, and implementation will likely bring battles back to the dais.

6) Burning a Rate Plan After 17 years of breath-holding, an Austin Energy rate plan shuffled toward Council to be born. Nobody was happy with the final product – most especially out-of-towners who will appeal to the state Public Utility Commission – but that might just mean it was the best that could be designed under the circumstances.

8) Mo' Money For the first time in several years, the city budget news came in just a bit more optimistically, with a little more to go around to city parks and libraries. There's still a structural imbalance between public safety expenses and ... everything else, but the city has weathered bad times fairly well.

9) Mystery Train One of the most important stories was the whistle that didn't blow – as Mayor Leffingwell announced that, once again, the November bond package would not include funding for an urban rail system: "too many unanswered questions." Listen for that lonesome whistle in 2013.

10) Animal Planet After a couple of years of wrangling over "no-kill" matters, Council decided to lease the old Town Lake Animal Center to Austin Pets Alive! as a secondary center for animal rescue in addition to the new shelter on Levander Loop. The details are complex – and the controversies still rumbling – but Austin's animal-friendly bona fides were reconfirmed.