Then There's This: The Irony of Conservation 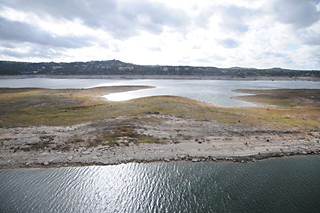 This is how Lake Travis looked on Nov. 9. It looks the same today. (Photo courtesy of The LCRA)

Austin Water Utility Director Greg Meszar­os dreams of a day when he can address the City Council without the inconvenient truth of Water Treatment Plant No. 4 creeping into the discussion.

He may have hoped for such a day at Coun­cil's last meeting of the year Dec. 13, when he appeared before the dais bearing glad tidings of a successful water conservation program, which is turning out results that are beyond staff's expectations. But Council Member Bill Spelman briefly dampened the upbeat spirit by pointing out the obvious: The achievements of the conservation program bear out arguments that there was really no urgent demand to build a new water treatment facility, which is in the final stages of construction and $15 million over budget.

"I just need to point out environmentalists were right and you were wrong," said Spelman, referring to the emotionally charged series of debates leading up to the 2009 Council vote on the plant. "Because," he continued after pausing a beat, "you have done such a wonderful job with conservation ... and if you want to say you're happy you're wrong ... this would be a lovely time to say so."

Spelman's lighthearted jab brought a slight wince to Meszaros' face. The director noted his desire to one day stand in front of Coun­cil and discuss water conservation without having to address the elephant in the room. He did allow, however, that he had indeed low-balled the numbers on projected water savings "and we're exceeding the goals more than I expected."

In fact, so much water is being saved (thanks in large part to the drought-mandated watering restrictions), that the city has managed to delay by seven years its "trigger payment" to the Lower Colorado River Author­ity – a savings of about $95 million, Meszaros said. A contract agreement inked with the LCRA in 1999 calls for the city to pay a higher rate once its draw from the Colorado River hits 201,000 acre-feet of water per year for two consecutive years. The city currently is holding steady at about 170,000 acre-feet.

Moreover, Austin is ahead of schedule in its goal to reduce overall consumption to 140 gallons per capita per day by 2020, and is now using about 142 gallons per day, Mes­zar­os said – a 13% drop in the last five years.

Spelman pointed out that the utility's conservation program has been helped along by a "wonderful marketing tool called an empty Lake Travis." Images of an expanded shoreline and bone-dry islands in the lake serve as a reminder to use less water, he said. Lake Travis is one of two water supply reservoirs for the region.

Mayor Lee Leffingwell agreed that the lake's reduced water levels do influence water usage, but he couldn't let Spelman's WTP4 remarks go without offering a defense for the utility and the new treatment facility. "Yes, our projections [for consumption] are lower, and it looks like we're going to go a longer period of time without hitting our trigger ... and we're going to go a little bit longer as far as the actual capacity need for an additional water plant," he said. "The decision to build a water plant was based on predictions at that time. Now we have a different prediction – who knows what it's going to be in the future, but the point is we do need the water plant – the exact year that we're going to need that capacity is still unknown, but it's better to have it than not have it." There were other reasons for building the treatment facility, he said, including the fact that a more modern facility will reduce Aus­tin's carbon footprint by about 13% because it will require less power than the two existing plants.

"At the risk of reopening the dialog," Lef­fing­well said, drawing a little laughter from the dais, "I felt like I had to say that."

The back-and-forth over WTP4 sidetracked what was supposed to be one of the high points of the Council briefing: Mes­zaros was joined at the podium by Resource Manage­ment Commission Chair Leo Diel­mann, who was on hand to endorse the conservation program's progress and report on improved relations between utility staff and the Council-appointed RMC. A year ago, the two sides had all but stopped speaking to one another due to their disagreements over how well, or how poorly, the program was working. RMC members complained to Council about what they believed was a lackluster conservation effort and the utility's apparent reluctance to share information. In response, Council members prodded the utility to start working more collaboratively with the commission. "We came to y'all 18 months ago very critical of the water conservation program and of the water utility," Diel­mann told the Council. "What we didn't realize 18 months ago is that the water utility has made very good progress toward these goals."

But all of this cheerfulness was enough to make water watchdog Paul Robbins gag. He said he felt like a "caged rottweiler" during the briefing, which he said was set up on the agenda in a way that did not allow for public comments. The utility, he says, is still underachieving in many areas – water-saving landscape incentives, irrigation audits, and rebates for rainwater harvesting equipment and water-efficient toilets. He said he outlined these and other shortcomings in an update to his 2011 report, "Read It and Leak," which he provided to the RMC in November.

"The Council isn't getting the Christmas present they want, which is a working program," Robbins said. "Maybe they were desperate to find some success in all this, and they feel that it's good to get the [utility and RMC] in the same room."

Trading Grass for Cash
When it comes to water, Augustine is no saint