Water: Rising to the Surface

Texas was deep into a record-breaking drought when the Legislature closed out its 2011 session without even a hint of direction, much less debate, on how the state would manage the challenges of a diminishing water supply in a region that's projected to grow drier and more populous in coming decades. (You'll recall that abortion, voter ID, and sanctuary cities were the "emergency" headliners of the session.) 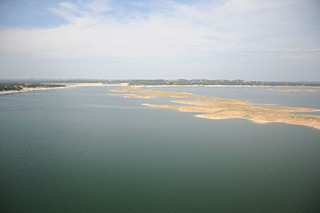 But the 2013 session could turn a corner on the water front. In a case of "better late than never," lawmakers now appear to hold a stronger grasp of water, or the lack thereof, as an economic development issue. (Heaven forbid they consider it from an environmental perspective.) Legislators perhaps got their biggest wake-up jolt from the Texas Water Development Board's 2012 State Water Plan, which provided 295 pages of sobering facts, recommendations, and, in a sense, ultimatums. The report framed its warnings in the form of dollar signs – a language that the always business-friendly Lege can understand and appreciate: "Annual economic losses from not meeting water supply needs could result in a reduction in income of approximately $11.9 billion annually if current drought conditions approach the drought of record, and as much as $115.7 billion annually by 2060, with over a million lost jobs."

So it came as no surprise that Lt. Gov. David Dewhurst would introduce the idea of creating a water infrastructure development bank during a recent talk before the Dallas Regional Chamber. He suggested drawing $1 billion from the state's Rainy Day Fund to help local governments develop new reservoirs, desalination plants, and other infrastructure projects recommended in the State Water Plan, which also calls for strong conservation initiatives. (For commercial balance, he also suggested drawing from the till to help pay for transportation projects.) The day after the lite guv's speech, state Rep. Lyle Larson, R-San Antonio, filed House Bill 227, which would do just that.

Though a billion dollars is just a drop in the water bucket, especially at this late stage, that amount would nevertheless help jump-start a statewide endeavor that the state water board estimates will carry a price tag of $53 billion a year over the next 50 years. Since the Rainy Day dip would require a two-thirds majority vote in both legislative chambers, the no-spend Tea Partiers are expected to be a tough sell on this one.