Women's health care: Can it get worse?

It's hard to imagine that the 2013 session could be any worse for women's health care than the disastrous 82nd. At the end of the April Fool's Day 2011 family planning budget slash-and-burn, the roughly $100 million biennial budget traditionally allocated for women's health services had been cut by two-thirds, with lawmakers diverting every possible penny away from funding basic health care for uninsured and low-income Texas women. Barring a very unlikely reversal, that means the state will be left with roughly $30 million to spend over the coming biennium to serve as many low-income women as possible – and judging from numbers released last week, that will be precious few (see "Texas Women's Health Care: Costs More, Does Less," Newsdesk blog, Nov. 30).

There are more than 1 million women in need of family planning health services in Texas, and already, the $100 million budget was serving just a fraction. Whether the state will retain administration of the $30 million in federally dedicated Title X family-planning program money is now uncertain. Last month, Fran Hagerty, CEO of the Women's Health and Family Planning Assoc­ia­tions of Texas, announced that she's building a coalition of family planning providers to apply directly for the Title X funds. The feds have previously granted funds directly to providers in Texas, so such a process is not without precedent. Indeed, it seems likely that Planned Parenthood will also apply directly for Title X funds. If the clinics are successful, the state may face the end of its influence in deciding which providers women may see for their health care. 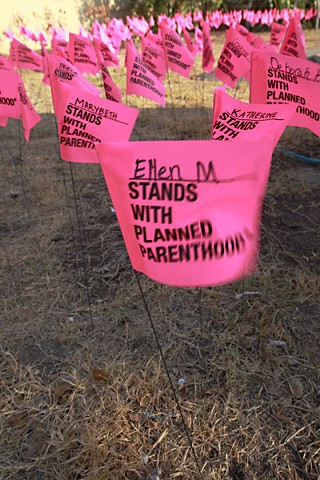 Planned Parenthood has been the biggest loser in the state's substantial budget cuts to women's health. (Photo by Jana Birchum)

Meanwhile, the state says it is moving forward with a state-funded Women's Health Program, designed specifically to exclude Planned Parenthood from providing services to any of the more than 111,000 women currently enrolled (though not necessarily able to access services). Under the old WHP (a 90%-federally-funded Medicaid-waiver program that saved the state tens of millions each year by preventing unwanted pregnancies), Planned Par­ent­hood has consistently served more than 40% of WHP clients. A lawsuit is currently pending over PP's exclusion, but for now, PP remains in the program, and the feds continue to fund the program through Dec. 31. The state plans to roll out its program on Jan. 1.

If Rep. Lon Bur­nam, D-Fort Worth, has his way, that lawsuit would eventually be moot. His HB 58 would strip language effectively banning Planned Parenthood but would leave in place language that commands state health officials to draw down as many federal dollars as possible to be used in a medical assistance program, such as the WHP. The bill is admittedly a long shot, despite clinic closings and clients abandoned by last session's cuts.

Sen. Dan Patrick, R-Houston, has refiled his SB 97, which would require a doctor to first do an examination and then also provide in person medicines that induce abortion, a provision that particularly burdens women in rural areas with limited medical access.* Last session, Patrick successfully sponsored the transvaginal-ultrasound-before-abortion bill.

Finally, although at press time it had not yet been filed, Capitol watchers anticipate a pro-life bill – at least if Texas Right to Life has anything to say about it, and in Texas politics TRL most certainly does. TRL Director Eliza­beth Graham emailed supporters that a bill is imminent that would "establish a state interest in preborn life that can feel pain according to peer-reviewed medical literature" and would therefore outlaw abortions for all "preborn children who feel pain," which according to Graham begins at 20 weeks – the next medically dubious frontier in the abortion rollback.

Correction: The original version of this story incorrectly referred to Sen. Dan Patrick's SB 97 as requiring a doctor to administer an abortion-inducing drug in person, contrary to FDA guidelines. In fact, FDA guidelines restrict access of the abortion-inducing drug mifepristone to doctors, though in some states, including in Texas, medical professionals other than doctors – including nurse practitioners – are allowed to administer the drug.