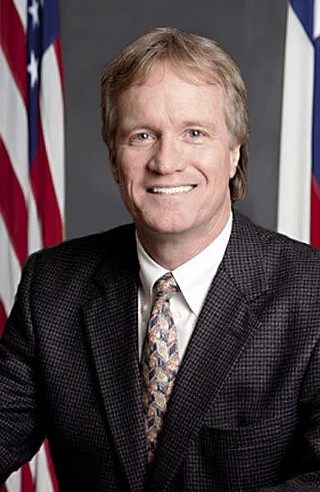 Texas Facilities Commission Executive Director Terry Keel has a deal for us.

Considering the lousy history of collaboration between the city of Austin and the state of Texas, a new development agreement between Austin and the Texas Facil­i­ties Com­mis­sion might seem like a step forward. Yet City Council members are questioning a new TFC proposal, just as a state review of the commission's operations proposes that all such deals be suspended until legislators can review and rewrite the body's governing rules.

The innocuous-looking Item 63 on Coun­cil's Dec. 6 agenda instructs City Man­ager Marc Ott to enter into an interlocal agreement with the TFC to study potential developments on state-owned city land in Austin. The proposal covers six large and valuable tracts under the state's Capitol Area Development Strategy:

2) the William P. Hobby building at Third and Guadalupe;

3) the complex at 45th and Lamar that includes the Depart­ment of Social and Health Services and Department of Assist­ive and Rehabilitative Services buildings;

4) the Austin State Hospital campus at 41st and Guadalupe;

However, Council delayed making a final decision about this on Nov. 8. Mayor Pro Tem Sheryl Cole, who sponsored the measure, argued that it simply formalizes a policy set in November 2010, when Council approved a resolution to get more deeply involved with Capitol-area planning. "Whenever the state of Texas has embarked on a redevelopment process," she said, "it has been fraught with citizen and city input challenges and discord."

The TFC is basically state government's custodian, responsible for the basic operations of state buildings and sites, from construction to energy to renting properties. It is currently led by controversial ex-Travis County sheriff and former state Rep. Terry Keel, who was a surprise choice for executive director as he has no real estate or facility management experience.

TFC Portfolio Manager and Public Liai­son Aundre Dukes, a nephew of state Rep. Dawnna Dukes, told Council that the agreement merely set the groundwork for future development. And even though Council voted 6-1 to bring the measure back this month, on Nov. 13 the TFC issued a request for qualifications – looking for architects, cost estimators, and designers to create a project team for the planned plots. Cole described the interlocal agreement as opening "a new chapter of how we do business with the state."

Yet residents of the Allandale and Bull Creek neighborhoods told Council they oppose the proposal, and that it is undercooked. Council Member Mike Mar­tinez said he was concerned about what the deal would mean for the city's zoning process; similarly, Council Member Laura Morrison saw the agreement as very one-sided in favor of the TFC and feared that the city would be cut out when development really starts.

Council split 6-1 to reconsider the measure this month, but with major strings attached. Ott was simply instructed to keep negotiating, rather than sign a deal, and so it returns this week for further review. Morrison, who was the sole nay vote, said she did not oppose developing the planned areas, but that the agreement is not "the appropriate vehicle to memorialize our relationship with that planning, and how we can be at the table." Without even a clear price tag for the study, she said, "I think we need to have a full picture before we move ahead."

Morrison feels even more secure in her decision since the state's Sunset Commis­sion released its draft report on the TFC, which chronicles multiple basic failures: sub-par reporting requirements, a failure to adopt best practices for contracts, and the fact that the TFC "struggles to effectively plan for and manage its deferred maintenance needs." The authors were particularly concerned about how the TFC's role changed dramatically last session with the passage of Senate Bill 1048. This allowed the TFC to enter into public-private partnerships, or "P3s," of the kind proposed by Cole. Texas has used P3s for years – mostly famously for toll roads. However, P3s are a new endeavor for the TFC; traditionally, such projects have been handled by the General Land Office, like the initially contentious but ultimately well-received mixed-use development of the Triangle. By contrast, the Sunset report states that "TFC lacks a sufficiently robust approach to fully evaluate the benefit and risks of P3s" and that the process lacks any meaningful stakeholder input.

Significantly for Cole's proposal, the report's authors said they have "significant concerns about how quickly TFC is moving with P3 projects" and recommend that the TFC "delay formal action on P3 proposals until after September 1, 2013" – the date at which any new legislation passed next session would take effect. Both Mar­tinez and Morrison told their fellow Council members that they had spoken with members of the Travis County legislative delegation who felt the interlocal agreement was premature. With the Sunset Commission urging a review of what SB 1048 did, Morrison said it is "critical" that the city hold off until legislators can review recommendations that "if adopted, would result in significant changes in sorting through roles and responsibilities and process for planning in general for state lands, and specifically for P3 projects."