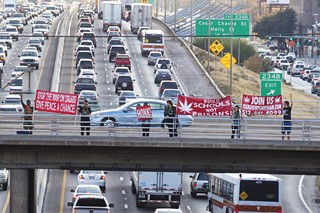 Members of the Texas Hemp Campaign proudly displayed their support on Nov. 30 for the legalization of marijuana. For the past three years, the campaign has dropped its banners from the 11th Street bridge on the last Friday of every month. (Photo by Jana Birchum)

• City Council meets today (Thursday) with a heavy agenda of controversy, including Austin Water cost overruns for Water Treatment Plant No. 4 and a proposed incentive package for Visa – and those are only the headlines. Expect a long meeting and a brace of postponements. See "Beside the Point: All the Arguments That Fit."

• Austin ISD's new board of trustees took a new direction at their Dec. 3 meeting, canceling discussion of opening a boys' academy for the 2013 school year and instructing Superintendent Meria Carstarphen to rewrite the district's agreement with IDEA Public Schools to delay their expansion into Eastside Memorial (see "An IDEA Whose Time Has Passed?").

• The Court of Criminal Appeals on Wednesday granted a new trial for death row inmate Cathy Lynn Henderson, convicted of the 1994 killing in Travis County of 3-month-old Brandon Baugh. New science has cast doubt on Baugh's death, suggesting it could have been a tragic accident. For more, see "Henderson Granted New Trial," Newsdesk, Dec. 5.

• Austin's new federal courthouse opened Dec. 3. The $123 million structure next to Repub­lic Square Park, paid for with federal stimulus cash, replaces the old court house on Eighth Street, which was too small for current needs.

• As a result of last year's devastating cuts to the state's family planning program, the number of clients served statewide in FY 2012 declined by 63%, to just more than 75,000, while the cost of serving those clients actually increased by 15%. See "Texas Women's Health Care: Costs More, Does Less," Newsdesk, Nov. 30.

• Austin's deadly year for traffic accidents continued unabated this week: On Dec. 2, 28-year-old Belinda Cisneros was killed after the Suburban she was riding in was pinned against a signal light pole by an 18-wheeler, after the driver of the Suburban turned left in front of the truck. That was Austin's 71st traffic fatality of 2012, which includes the deaths of 28 pedestrians, a record number.

• Austin/Travis County EMS Captain Randy Trinkle, 46, was killed in a Saturday morning crash near Fredericksburg. The 15-year department veteran was driving to his home in the Hill Country when he got into a head-on collision around 9am. Services will be held Thursday, Dec. 6, 1pm, at the First Baptist Church in Fredericksburg.

• GOP vs. reality: According to post-election numbers from Public Policy Polling, 49% of Repub­lic­ans think ACORN hijacked the Nov. 6 election for Obama, even though the group no longer exists.