Development incentives policies seem to be swinging in workers' favor 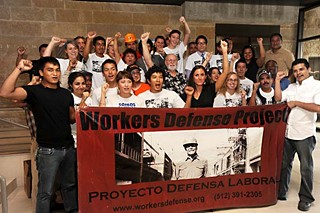 Despite the clear trend here, none of this comes without all kinds of hand-wringing from contractors, the Austin Chamber of Com­merce, and Mayor Lee Leffingwell. For contractors, the worry centers around (predictably) the impact of increased wages on their respective bottom lines. On the other hand, the chamber and Leffingwell worry that such changes will implode the city's very robust economic development program (see: Apple, U.S. Farathane, and HID Global, to name a handful of recent cases).

Workers advocacy organizations – particularly the Workers Defense Project, which gets a gold star for pushing hard on the issue over the past year – say the relative financial impact of higher construction wages on a project is minimal. Development-minded folks aren't so sure. They say that even the 1% increase suggested by WDP would amount, using HID Global construction as a marker, to $300,000. Not pennies, that number.

As part of his slate of suggestions, Council Member Mike Martinez offered a bone to contractors. He called for the creation of a collateral pool that he hopes will help offset the pain for subcontractors trying to make wages while waiting for a check from the prime contractor. The pool, Martinez told online In Fact Daily, will probably be funded by the city.

None of this was enough for Leffingwell, who pictured trouble if it's all passed by the full council. The mayor tried to offer an amendment that would make the wage floor an option for companies looking for bonus incentives, not part of the core set of requirements for receiving public funding. His suggestion did not get a second.

This sets up a vote at council where Martinez, Morrison, and Tovo will need just one more of their colleagues to sign off on the new requirements. We know it won't come from the mayor. That leaves the trio of Mayor Pro Tem Sheryl Cole and Council Members Chris Riley and Bill Spelman – at least one of whom is likely to get on board.

Meanwhile, regarding what is likely a more far-reaching action, Leffingwell and Martinez opposed a policy proposal that would require city staff to brief council members on proposed incentive deals before, rather than after, negotiating them.

Beside the Point: All the Arguments That Fit
City council agenda packed with volatile materials 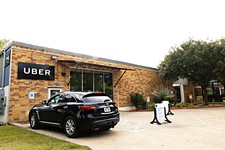 Austin Rideshare Drivers Get Organized
Local chapter forms in support of the Protecting the Right to Organize Act, a renewal of workers' rights