Still Looking for a Home

Austin searching for a comprehensive solution for homelessness

Travis County's Patient No. 1 lives behind a cloak of anonymity, provided both by official practice and a particular set of life circumstances. Chances are you will never meet Patient No. 1, but you're deeply invested in Patient No. 1. In calendar year 2010, Patient No. 1 absorbed $75,407.41 worth of emergency medical care, and you paid for it. Patient No. 1 does not have a home, let alone any sort of insurance coverage. Instead, Patient No. 1 depends on care from local emergency rooms or, every once in a while, the county jail. Patient No. 1 is a poster patient, and a metaphor twice over – the wandering personification of a national problem, and the living, breathing argument for its solution.

So what is Austin to do with Patient No. 1 – and, for that matter, with the portion of the homeless population that isn't Patient No. 1: the single moms who live in cars, the gentrification-ousted renters, the whole tragic mess of homelessness?

To get at it, Austin could well turn to existing, successful models for inspiration. The city of Miami designed a solution that includes a business-community-backed (i.e., well-funded), comprehensive approach that offers a significant portion of the city's homeless population real ways to get off the street. Since its 1993 inception, the effort there has reduced the city's homeless population from 8,000 to just 1,000 "street" homeless. Three Austin City Council members, high-ranking city administration officials, and a host of advocates from such organizations as the Downtown Austin Alliance and Foundation Communities have been to Miami to see the solution up close. Some version of this program could find its way to Central Texas.

Closer to home, San Antonio officials built a sprawling, 15-building, 37-acre campus that surrounds transitioning homeless with a variety of on-site services. Austin policymakers say the city doesn't have the space to provide a San Antonio-style campus, and besides, it might be seen as a segregationist solution. Yet, the San Antonio method serves nearly 1,000 down-on-their-luck citizens and sleeps up to 500 a night. By comparison, the Austin Resource Center for the Homeless sleeps only 100.

None of this is to say that there aren't substantial efforts in Austin to help Patient No. 1. Indeed, the city has more than a fistful of existing advocacy and outreach organizations already doing the hard work. But there is no overarching plan – a funny situation for a town so devoted to planning. Worse, when the city went to its own voters on Nov. 6 for $78.3 million in bond funds to support affordable housing in the region – a key portion of any comprehensive approach to the homelessness issue – the voters declined. It was a significant, and somewhat surprising, blow.

The election has thereby complicated the obvious question: What's next?

According to the website of a private partner in Miami/Dade County's program, the Florida version of the story reads like a Dickensian rich-man-makes-good fantasy, complete with a bit of deus ex machina provided by a court order. The story starts with a quote from Alvah Chapman, a former publisher of The Miami Herald: "In 1991, when I left my Knight-Ridder office and drove south, I was appalled by the sea of humanity that was living under the expressways in conditions that would have been a disgrace to a third world nation."

Chapman, according to the South Florida Sun-Sentinel, pushed Florida's then-Gov. Law­ton Chiles to create the Governor's Commission on the Homeless in 1992, and to appoint Chapman to it. The Sun-Sentinel – a competitor of Chapman's Herald – says that the effort was "jolted" into place by an Ameri­can Civil Liberties Union lawsuit accusing Miami-Dade of "a pattern of unconstitutional treatment of the homeless." Obviously, the program needed funding – and by 1993, Florida jurisdictions were granted the authority to impose a 1% food and beverage tax and direct a significant portion to homelessness-combating programs. Miami-Dade would be the only region in the state to take the opportunity.

Miami-Dade began to see an impressive turnaround in its homeless population. By 1997, even the Sun-Sentinel had called the progress "striking." In 1998, the program was recognized as a national best practice. The Miami model found success – at least in the Chapman program – in a comprehensive approach that offers the region's homeless sleeping accommodations at facilities that also boast social and medical services and offer meals and job training, as well as mental health support.

The plan includes a strong outreach program – nicknamed the Green Shirt effort, for the color of the tops worn by its workers – that aims to get homeless Miamians quickly off the street. The Green Shirts carry a list of available services and the ability to immediately direct individuals to the appropriate place.

Some observers argue that Miami's numbers, especially the initial 8,000 estimate, aren't quite accurate, but no one questions the visible success of the Chapman effort. Still, it's not quite fair to compare Miami to Austin. Even if Austin had a comprehensive outreach program like Miami's, the city still wouldn't have enough empty beds, caseworkers, or housing to answer the need. Ann Howard, executive director of the End­ing Community Homelessness Coali­tion, says, "The Chapman Center, which does a great job, is not a shelter for folks with mental illness. They are at a different shelter in Miami. ... They've culled out who's going to the Chapman."

She continues: "It's not the right comparison if we're worried about what's going on Downtown in Austin, Texas."

The beginning of San Antonio's program reads a lot like Chapman's call to power. According to the private nonprofit Haven for Hope's website, local "business and civic leader" Bill Greehey – chairman of NuStar Energy – saw a documentary on San Anto­nio's homeless population in 2005. Five years later, Greehey, in partnership with local politicos, opened a massive campus that Haven for Hope claims is "the largest, most comprehensive Homeless Transfor­mation Campus" in the United States. In addition to beds, the facility contains treatment options for addiction and mental illness, job training, and chapel services. According to a January 2012 report prepared by the facility, "The Haven for Hope campus increases the effectiveness of 78 nonprofit service providers [40 housed on-site], who are now able to collaborate."

Haven for Hope is a centralized facility, something that critics might dismiss as a ghetto of poverty separated from the rest of the city. It's still a bit early to evaluate Haven's success, but its approach seems persuasive. "Studies show that up to 80% of people who become homeless can quickly regain self-sufficiency if they receive supportive services such as those found at Haven for Hope," continues the 2012 report. "Following best practices based on thorough research on homelessness and substance abuse, the campus provides holistic treatment by combining: Housing, Food, Health, Job/Employment, Education, Finan­cial, Social Support Services, Case Man­agement, Spiritual and Targeted Pop­ulation Services within a single campus." 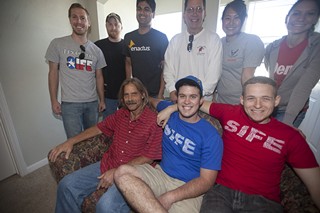 In two years, Haven for Hope has found work for 700 of its clients and permanent housing for nearly 900. According to spokeswoman Evita Mendiola, Haven's early success stems from its ability to avoid the predictable barriers for a homeless population, thanks to the on-site services that let Haven residents access social services without having to worry about how to get to them.

Bill Brice, security and maintenance director for the Downtown Austin Alliance, notes one problem with the San Antonio approach that might also be an issue for Austin. Though the program has been successful in moving people off the streets into temporary shelter, the logical next step has been somewhat elusive. "They are recognizing that they don't necessarily have the [permanent housing] units to move those people into," Brice says.

There are certainly lessons for Austin in each of these programs. Foundation Com­mun­ities is one of the Austin success stories, and Executive Director Walter Moreau says that some of the success of the Miami and San Antonio programs is due to the simple fact that those efforts provide reserved beds. "You have a reserved spot that you don't have to leave in the morning," he says. That's not the case for Austin's emergency shelter, the Austin Resource Center for the Homeless, where some of the most acutely needy turn.

In the first place, the ARCH is primarily a first-come, first-served emergency shelter and is not equipped to serve as a centralized intake facility for the chronically homeless. According to Howard, only a fraction of the population that visits the ARCH receives case management services – the kind that help direct an individual through the sometimes byzantine world of federal, state, and local social support services.