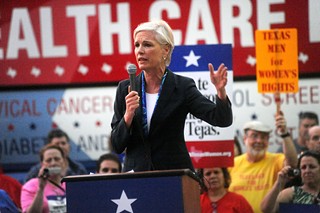 Travis County District Judge Stephen Yelenosky on Nov. 8 granted a temporary injunction barring the state from enforcing a rule that would keep Planned Parenthood from participating in the Women's Health Program until a trial on the merits of the case can be held in December. The nonprofit, he wrote in a letter to both parties, is "likely to prevail on their claim that the rule is inconsistent" with the will of Texas lawmakers. In response, Attorney General Greg Abbott immediately issued a notice of appeal, which lifts the injunction until the 3rd Court of Appeals weighs in. Yelen­osky's ruling, the state alleges, "incorrectly halts implementation of State law," Lauren Bean, Abbott's deputy communications director, said in a statement.

At issue is a rule defining who may provide services under the WHP, a Medicaid-waiver program that provides family planning and basic health services to low-income and uninsured women who wouldn't be eligible for Medicaid unless pregnant. It also aims to reduce the number of unplanned pregnancies in Texas, where more than half of all pregnancies are paid for by Medicaid, to the tune of $2.9 billion in 2009. It is undisputed that the program has saved the state millions, with the federal government paying 90% of the nearly $36 million annual cost for services.

Despite the program's ongoing success, the state last year undertook to rewrite the program rules in order to ban PP from participation. Across the state, 26 PP clinics provide services to nearly 50,000 clients. In recasting the rules, state health officials sought to kick PP out of the program because some PP clinics in the state use private funds to provide abortion care. None of the PP clinics involved in the WHP provide abortion services; indeed, abortion is not covered by the WHP, and pregnant women aren't eligible for WHP services.

The state's decision to ban PP prompted the federal Centers for Medicare & Medic­aid Services to tell the state that it would no longer be able to fund the WHP because the ban on PP would violate federal law that guarantees women access to the family planning provider of their choice. (In a Nov. 7 letter, CMS Director Cindy Mann reiterated the federal government's position: "We have made clear that we would have been willing to continue to provide full federal funding for WHP as long as Texas refrained from implementing a rule that is inconsistent with these legal requirements.")

In response, Gov. Rick Perry said earlier this year that the state would forgo federal funding and come up with the money to pay for the program so it could keep the ban on PP's participation; Health and Human Ser­vices Executive Commissioner Dr. Kyle Janek said last month that the program would be ready for implementation in November.

PP earlier this year sued in federal court, arguing that the new rule violates free speech and association and due process rights; the district court agreed, but the 5th U.S. Circuit Court of Appeals in August overturned that decision. Late last month, PP took the fight to state court, arguing that the ban actually violates state law; Yelenosky agreed that PP was likely to prevail and issued the injunction Nov. 8 after a several-hours-long hearing.

PP lawyers Mike McKetta and Pete Schenkkan argued to Yelenosky that Chap­ter 32 of Texas' Human Resources Code specifically renders "inoperable" any provision – like the new WHP rules – that causes the state to lose federal funding for any medical assistance program. The decision to overrule or rewrite that specific provision lies with state lawmakers, not with the executive branch or with health department bureaucrats. "The purpose is to get all the benefits [Texas] can" from federal coffers, McKetta said. And the inoperability section expresses "emphatic legislative intent: If something gets in the way [of collecting federal funds], that section is inoperable," he continued. "Unless the Legislature in 2013 says we no longer care about getting federal money. That's up to them to do. It's not up to Governor Perry or Dr. Janek or state health officials."

The new rule was made without any "reasoned justification" – which would be required – and specifically to oust PP, without any regard to the basic program goals of expanding access to health care for women in need and reducing the number of unplanned pregnancies. "The evidence shows [the state is] abandoning access for tens of thousands of people – and they've never given a reasoned justification about how" the new rule would further a state goal, McKetta said. Instead, he said the change was made "by an agency run amok; it did something without legislative authority," and something state law specifically tells them not to do.

The state disagrees, arguing that the executive branch of state government has the power to decide which Medicaid-funded programs the state should participate in, meaning that it doesn't have to participate in a federally supported WHP and may choose to go its own way with a state-funded, PP-banning program if Perry or Janek decides that's the way to go. The Legislature "can put out the parameters to be considered" in what federally funded programs should be pursued, Texas Assistant Solicitor General Kristofer Monson told Yelenosky, but "at some point the executive [power] has to mean something."

Monson also argued that even if the inoperability clause is relevant, the federal government doesn't actually have the authority to deny the state Medicaid funds for the WHP. Whether the new Texas rules actually violate federal law is up to the federal courts to determine, Monson said, noting that a federal suit challenging the CMS decision to defund the program is pending in federal court in Waco. In that suit, the state argues that federal law only allows Medicaid recipients to obtain services from "qualified" providers; because the state has determined that PP is not qualified to participate in the WHP, that should mean that they're not eligible for Medicaid funds passed back to the state. So far that argument has not been persuasive to federal jurists; the 7th U.S. Circuit Court of Appeals last month rejected a similar argument from Indiana, which was also seeking to deny Medicaid funding to PP clinics there.