In a surprising sweep Tuesday, Republican candidates won all four balloted seats on the influential Third Court of Appeals, turning the entire court red save for the chief justice spot, which remains in Democratic hands.

The Third Court is one of 14 intermediate appellate courts statewide, but the Austin-based court, which serves 24 counties, has statewide impact. In addition to the routine civil and criminal cases it hears, Third Court judges also consider appeals involving state agencies and officials – from utility and environmental regulations to licensing disputes to public corruption cases – that have statewide ramifications. As a consequence, control of the court is hotly contested, and over the last decade, a delicate balance between GOP and Democratic judges has been maintained.

With the GOP sweep on election day, that balance is gone, and just one Democratic jurist, Chief Judge Woodie Jones, remains on the Third Court bench.

Election night for these seats routinely lasts into the wee hours of the morning as returns from West and Central Texas counties trickle in – although over 40% of the district's population is in Travis County, winning the Austin vote isn't enough to put a candidate over the top. Successful Democratic candidates for the Third Court have to carry Travis County while also pulling in a significant minority of votes in other populous counties like Williamson. This time around, none of the Democratic candidates won more than 40% of the WilCo vote – though all four topped 60% in Travis.

In the final tally, each of the four Republicans won with between 51.7% and 53.8% of the district­wide vote. Austin civil attorney Scott Field ousted incumbent Dem Diane Henson to join GOP incumbents David Puryear, Bob Pemberton, and Rick Perry-appointed Jeff Rose in the winner's circle. 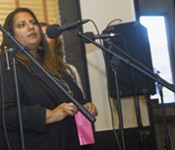