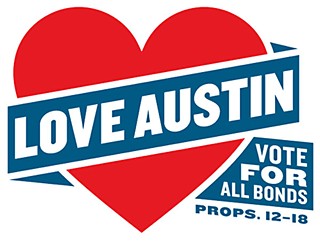 "Hope is that stubborn thing inside us that insists, despite all the evidence to the contrary, that something better awaits us." – newly re-elected President Barack Obama, Nov. 7, 2012

It's often said that "elections have consequences," although usually in the context of explaining their failures to the losing side. This time around, we can at least begin by looking at the results from the right end of the telescope – and there are plenty of reasons to celebrate.

To begin, we should savor the two biggest victories for Austin: Barack Obama's re-election and the Central Health medical school/medical program tax proposition. First there's the broad national significance of the presidential election: the confirmed, nationwide conviction that we'll continue to fight our way "forward," rather than return to the reactionary economic and social obsessions now driving the GOP. But beyond that real victory, in the local context, the successful defense of Obamacare now meshes precisely with the support of Travis County voters for not just a medical school, but a health care program that will partner with the federal government, through Medicaid funding, to invigorate the local health care system.

The burden wouldn't rest so entirely on local taxpayers if not for the irresponsibility of the state, led by Gov. Rick Perry's rejection of federal health care programs, even if it means abandoning basic health care for many thousands of Texans, especially women. To his singular credit, Aus­tin Sen. Kirk Watson saw earlier than most that the federal Medicaid waiver program represented a once-in-a-generation opportunity to leverage local and federal resources to do for Travis County what the state disdains to do.

With the validation of a national insurance plan (which will gather in most of the population) meeting a local commitment to make medical care more readily available to all our neighbors, Austin assumes the leading edge of social and economic progress. With the renewed Obama administration, this partnership is likely to deepen and grow over time, and in areas beyond health care. As the dust settles, will we be able to refocus our attention – with the partnership of the feds – on a real, countywide mass transit system?

The More the Merrier

Along with the Central Health proposition, Austin voters also supported six of the seven bond proposals, ranging from transportation to library and arts facilities. The sole exception was Prop. 15 – support for affordable housing – which seemed like an easy choice going in, in that "affordability" is a constant local obsession and voters had enthusiastically supported a similar bond in the past. The city will no doubt be considering what went wrong, and I suppose there could be several reasons. I'll venture a wild guess and suggest the ballot language – "78.3 million for housing bonds" and nothing more – was simply too imprecise and inexplicable for voters considering the bottom of a lengthy November ballot.

In that context, it's worth noting that many, many thousands more voted in this city election than normally do in May, and in doing so they made the overwhelming choice to keep city elections in November. It's a deeper, broader, more varied electorate, reflecting a deeper, broader, more varied city than existed 20, 30, or 50 years ago – and that electorate's now-permanent involvement in city government is going to change our politics in ways we can only speculate.

That brings us to the other radical restructuring of our local politics: single-member districts. Many of us, including those of us at the Chronicle, have been endorsing SMDs for so long we'd gotten accustomed to the expectation that the notion would be defeated once again. But this time, thanks in large part to both the November electorate and a much broader (and more expensive) campaign, both geographic district measures passed and the entirely SMD, 10-1 plan (garnering the most votes by a good margin) will be installed over the next couple of years (pending implementation and federal approval).

The Chronicle endorsed the 8-2-1 "hybrid" plan, but noted that the two versions were not nearly as polarized as the two sides (especially the 10-1 advocates) insisted. Both sides believe the new system will empower "the neighborhoods" – but it very much remains to be seen what that will mean on the ground. Certainly it should mean that the growing Hispanic population will no longer be confined by the "gentlemen's agreement" (and seven available seats) to a single semi-official representative, and that's all good. The relatively smaller (and shrinking) percentage of African-American residents is more problematic – and it's possible that some version of the "agreement" will survive the current structure.

But it's naive to believe – as some of the loudest districting advocates insist – that a districted City Council will inevitably be more "progressive" or "populist" or even "grassroots," any more than the districted Commissioners Court or school board has been. The western suburban districts, however designed, are quite unlikely to have the same priorities as either the central city or eastern districts (north, middle, or south). The 10-1 advocates in particular seemed both pleased and puzzled by the ample conservative dollars (homebuilders, real estate investors, libertarian tycoon) their campaign attracted – do they think that money will disappear when the "independent commission" maps are drawn? Campaigns that are cheaper to run are also cheaper to buy.

In truth, none of us know what the new Austin government will finally look like. The hope is – despite all the evidence to the contrary, as President Obama says – that something better awaits us.