The saga of the Austin Police Department's infiltration of the Occupy Austin movement continued in Harris County court last week when the real names of two undercover detectives assigned to keep an eye on the OA activities were finally revealed.

According to a transcript of the pretrial hearing, APD officers Rick Reza and Deek Moore – known to Occupiers as "Rick" and "Dirk," respectively – worked alongside already-outted investigator Shannon Dowell, aka "Butch," in keeping tabs on OA throughout the fall and into the winter of 2011. Reza and Moore's names were included in documents turned over by the APD to lawyers representing OA member Ronnie Garza and six other protesters now facing felony charges for using a so-called "lockbox" to obstruct a roadway at the Port of Hous­ton during a protest there in December 2011. The issue yet to be resolved is whether Reza, Moore, and Dowell actually induced Garza and the others to use the device, which ratcheted up the obstruction of a road charge from a misdemeanor offense to a felony punishable by up to two years in a state jail.

According to Garza and other Occupiers, they hadn't considered using a lockbox – a sleeve made of PVC pipe into which protesters can slide their arms and lock themselves together with carabiners and bolts – until the undercover officers suggested it. Moreover, they say the cops, posing as Occupiers, actually bought the materials and assembled the devices, delivering them to the protesters for use. Indeed, among the items turned over to the defense during the Oct. 31 hearing in Judge Joan Campbell's courtroom were a series of photos depicting Dowell and Reza assembling, and goofing around with, the device in a garage.

APD Assistant Chief Sean Mannix has said that the officers constructed the lockboxes because they were concerned about the safety of protesters and public safety personnel. Unless protesters release themselves from the lockbox – also known as a "dragon sleeve" – the devices often have to be cut off, which can pose a risk to both protesters and public safety officials, particularly if the opaque sleeves are booby-trapped. There had already been discussion of using the lockboxes during General Assembly meetings, Mannix has said, so the officers got involved in the process in order to keep everyone safe: If the cops actually made the devices (says the APD), then they'd be able to alert public safety officials to how they were constructed.

Ultimately, whether the protesters were induced or whether the cops merely reacted to the already planned use of the devices will be up to a jury to decide. Garza's attorney Greg Glad­den said in an email to the Chronicle that he is still reviewing the documents turned over last week. Garza is due back in court on Jan. 18 for a final pretrial hearing before a Feb. 18 trial.

For more on this, see "APD Infiltrates Occupy," Sept. 7. 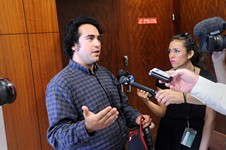