Then There's This: Cracking Down on Homelessness 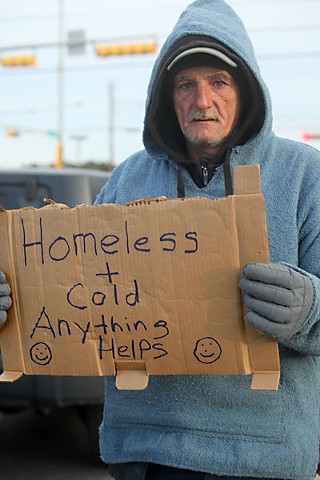 A homeless man hustles for change (Photo by Jana Birchum)

It's that time of year when Austin's charitable spirit comes to life, a time during holidays and cold snaps when homeless people are traditionally regarded with a little more sympathy.

This year, though, a police crackdown on crime Downtown has thrown the seasonal good will off-kilter. Questions have been raised about whether the Austin Police Department's stepped-up enforcement is really just a stealth attempt to drive out the homeless in advance of Formula One, and perhaps permanently – something that many Downtown business owners and residents have wanted for years.

In an Oct. 23 briefing to City Council's Public Health and Human Services Com­mittee, Police Chief Art Acevedo found himself on the defensive when questioned in greater detail about the new crackdown and the crime data used to justify it. APD mounted the zero-tolerance Public Order Initiative on Sept. 20, and plans to continue the effort through the end of the year.

"This is not an anti-homeless initiative," the chief said, assuring council members that they'll see a noticeable reduction in crime and an improvement in the quality of life Downtown. "This has nothing to do with F1 – that's an urban myth." Acevedo said that instead, the initiative was a direct response to data showing a rise in crime Downtown and a "growing chorus of complaints from residents and business owners and visitors."

During the initiative's first month, police made 34 felony arrests, including that of a "transient" who was wanted for attempted capital murder in San Antonio, Acevedo said. Additionally, there were 1,289 misdemeanor arrests and citations issued for offenses ranging from assault to public intoxication to jaywalking, including 183 enforcement actions for individuals violating the No Sit/No Lie ordinance.

Acevedo's backup team at the meeting included two Down­town residents who praised APD's beefed-up efforts. One reminded council members that there are now nearly 10,000 "taxpaying residents" living Down­town, and he encouraged APD to continue its strict enforcement. "If it could work in New York City ... [to] clean that nasty place up, it can certainly work here," he said, alluding to Times Square's seamy era before it became the tourist attraction it is today. Another resident lauded Acevedo's actions and cited a recent Downtown Austin Neighborhood Association poll* showing that 70% of its members had complained of aggressive panhandlers outside their residential buildings. "We're telling you that we're on a bad path down here," the speaker warned.

Acevedo has publicly stated his desire to move social service providers for the homeless away from the Central Business Dis­trict, which is a thriving entertainment hub at night. Acevedo is echoing the refrain of the Down­town business community and a growing number of condo and apartment dwellers. The theory is that relocating homeless providers to another area of town would result in fewer homeless people in the area and thus fewer incidents of crime. (see "Latest Homeless Initiative: Bust 'Em?," Oct. 12).

But the council committee members – Mike Martinez, Laura Morrison, and Chris Riley – were not convinced that homeless people were the central cause of Downtown's ills. Morrison recalled Acevedo's remarks to the media in September, before the initiative took effect. At the time, he told reporters that 38% of crime that occurred Downtown involved the transient population. But a closer look at the numbers shows they aren't what they seem at first glance, and Morrison, a math geek, arrived at a lower figure after requesting additional data from the department: APD reviewed a random sampling of more than 33,000 police reports from Downtown since 2010 and found that only 21% "involved" homeless people, and that 17% of that number had been identified as suspects. Morrison and Martinez asked that future data distinguish between homeless victims and homeless suspects. "It is important to understand when they are victims, because now we can determine how and why they're being targeted," Martinez said.

Acevedo acknowledged there were statistical discrepancies involving the homeless population and said he wasn't altogether satisfied with the initial data he had been given. "When you start asking questions, I'm not comfortable with the number yet," he told Morrison.

Morrison advised that it's not good policy to release crime stats to reporters before the numbers have even been verified. "It doesn't help a civil civic dialogue," she said. "It's perceived as inflammatory rhetoric." Acevedo switched gears and allowed that there are multiple factors in play Downtown. "A lot of alcohol is driving crime in a small area," he said. "The biggest problem I see is bars overserving people. That is a big piece of it." He said it's likely that college students make up the lion's share of APD's public intoxication reports.

In the end, the discussion did little to quell suspicions that APD's initiative is specifically targeting the homeless population – nor did it inspire much confidence in how APD uses crime data to justify new initiatives.