Are you scared of this postapocalyptic Austin?

Peter Kirby and Matt Sparks invite you to a new kind of haunted house. (Photo courtesy of Ecopocalypse)

It's tough to get people to think green – so Ecopocalypse wants to scare the sustainability into you. But even scarier for the creators of the new enviro-themed haunted house is learning how to run a Halloween attraction in Downtown Austin.

Event co-founder Peter Kirby credited his friend, business partner, and fellow Acton School of Business graduate Matt Sparks with the idea for the haunt. He called Sparks "an environmentalist to the core, and he's been scratching his head and trying to think of a business that's environmentally tinged." Last year he visited the award-winning House of Torment, and the message found its medium. "There were thousands of people in line, and he looked at it and went, 'Huh.'"

The haunt – which launched Oct. 18 with a gala for the Sustainable Food Cen­ter and remains open through Halloween – avoids the haunted house mainstays of, as Kirby puts it, "zombies and clowns and butchers. Because we're not 10 years into this industry, we really were able to look at it with hopefully new eyes." Instead, it depicts a near future when the environment has collapsed and nature is back to being red in tooth and claw. It's a tough balancing act to get the eco-message across without being so preachy that it scares audiences away. "It's so hard to message that stuff," Kirby said. "An Inconvenient Truth was so polarizing that it loses a huge chunk of the message." His hope is that, by not sermonizing, the haunt will be more effective. He said, "We put people in an environment that is really disturbing and haunting because of how scarcity and desperation changed people." The haunt even allows a little light at the end of the tunnel: "We tell the story of this dystopia, and then we have them emerge into Foodtopia." After the horror of scarcity, visitors arrive in what Kirby called "an oasis" of local food sustainable vendors. "We set it up as you can have one or the other," he said.

Somewhat aptly, their contrasting worlds of cornucopia and catastrophe are half a block off Sixth Street at the Coppertank Events Center at 504 Trinity. "It's a beautiful old, dusty, gothic kind of space," said Kirby, and he thanked owner Bob Woody "and his deep understanding of how Sixth Street works. ... He helped us do everything from leasing the lot next door for Foodtopia to standing there and walking us through the fire department stuff, [and he] made it possible for us to have a bar outside."

Kirby and Sparks have left the creative side of the haunt to the professionals they brought in – many of them also Acton grads – and have concentrated on the technical aspects of running a tourist attraction. That can be the toughest part: Even the legendary Nightmare Factory, a Central Texas institution, was shut down in 2007 when it fell foul of Buda's fire marshal (see "Bewitched," Oct. 26, 2007). Kirby said, "There are things we have learned about fire codes and ADA compliance that are now burned into my brain." Kirby credited the people behind Scare for a Cure, Austin's long-running cancer fundraising Halloween attraction, for guiding them through that labyrinth. Like Scare, Ecopoca­lypse depends more on actors, action, and plot than do some of the bigger haunts that rely on animatronics and special effects. Not that Kirby didn't have some big ideas. He was just fortunate the Scare crew could point them in the right direction. He said: "They'd say, 'Ah, yeah, this fire effect? The fire marshal ain't going to love this thing.' OK, note to self: no fire."

Ecopocalypse is open most evenings through Oct. 31; see www.ecopocalypseaustin.com for full schedule and more information. 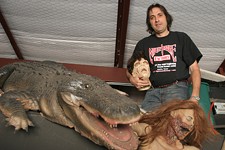