Then There's This: Giving Props to Austin

There's more to the bonds than meets the jerky knee

Municipal bond propositions aren't the sexiest items on the November ballot, but here's hoping city voters will take some time to consider each of the seven bond questions (Props. 12-18) before casting their votes. I'm writing about them in this space because after reading through various background materials and consulting with a few trustworthy individuals involved in the process, I decided, much to my surprise, to vote for the entire bond package, which is slightly out of character for this girl voter. Maybe I just let myself get snookered. Or maybe I'm jinxing the deal by supporting it, the way a Rick Perry endorsement becomes the kiss of death for a candidate.

There's no organized opposition to the bonds, but local Repub­lican groups have come out against them, of course, and their numbers are not to be underestimated this election year, even in Austin. Their beef lies mainly in the threat of increased property taxes. City officials have said the bond package's total cost, $385 million, is an amount the city can handle without raising property taxes. Of course, city officials don't exactly have a stellar track record on cost projections. Take the Lake Bird Lake boardwalk that voters approved in the 2010 bond election, for example. Or the recurrent cost overruns of Water Treatment Plant No. 4, which voters approved way back in 1984 – decades before the plant and its politics morphed into a completely different beast.

Although there's a little something in the package to benefit or appeal to almost all residents, some advocacy organizations in town are only endorsing one or two of the propositions rather than jumping on the Love Austin train – the theme of the campaign trying to sell the bonds as a package deal.

Some Better Than Others

I don't favor all of the would-be projects listed in the city's bond election material – that's the bad thing about bundling popular items with the less popular. The Parks and Recreation proposition, for example (Prop. 14) includes about $2 million to renovate the Barton Springs Bath­house, an expense I believe is extravagant and unnecessary. But the proposal overall has plenty of good to outweigh that annoyance.

From an investment standpoint, one of my personal favorites is Prop. 15, which would provide $78.3 million in funding for affordable housing (reduced from the $110 million community leaders had sought in order to meet the demand of Austin's booming population of homeless individuals, low-income families, and elderly homeowners). Should voters approve Prop. 15, the money would help finance four critical-needs areas:

• Permanent supportive housing: Designed for homeless individuals trapped in a cycle of going from the streets, to emergency rooms, jail, community court, and back to the streets, which ends up costing us about $40,000 a year per person.

• Home ownership: The American dream is becoming more of a necessity as residents look for ways to stay in the city without paying through the nose for rent. According to Habitat for Humanity, "workforce housing," or homeownership opportunities for low-income working households, would help stabilize neighborhoods and neighborhood schools. Austin needs about 13,000 affordable housing units to achieve this goal.

• Home repair: It's estimated that more than 13,200 low-income homeowners, most of them elderly, are in need of home repairs they can't afford. To keep seniors safe and in their homes, about $3 million will go toward repairing and rehabbing these older homes.

Things Could Be Worse

Austin's bond election is tame, even downright boring, compared to the hijinks and high drama playing out in El Paso, where city leaders hope to God that voters approve a two percent* increase in hotel bed taxes to pay for a Triple-A baseball stadium. Voters weren't given the opportunity to decide whether or not they wanted to demolish their city hall and replace it with a baseball stadium – the City Council made that decision for them last month. A former mayor has filed a lawsuit seeking an injunction against the demolition. It happens that Austin lawyer Bill Aleshire is also in the thick of it, on behalf of two El Paso attorneys who smelled a rat and asked him to join the fight. He's filed a criminal complaint against the city manager, plus open records requests seeking emails between city officials and two El Paso high-rollers – Paul Foster and Woody Hunt – who recently finalized the purchase of the Tucson Pad­res to bring them to El Paso; now all they need is a stadium ... right on the site where the city hall and a science museum happen to stand, but not for long, apparently.

On Election Day, I'll be closely following the vote returns on Austin bond props, and I'll be thanking my lucky stars that I live here, and not in my crazy, corrupt, much beloved hometown of El Paso.

Check out our handy election guide to all the local races and propositions, "Breaking Down the Ballot," and our endorsements. And see more info on the bonds and the bond advisory task force's recommendations on the city's website, www.austintexas.gov/department/2012-bond.

*This story has been changed to correct the amount of a proposed hotel-bed tax increase on the El Paso ballot. 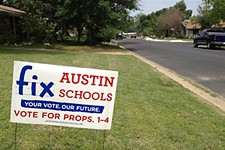