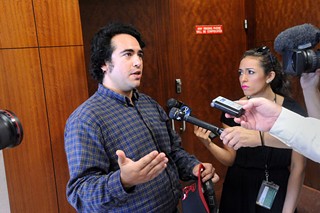 If the city of Austin – and, importantly, the Austin Police Department – had its way, the charges pending in Houston against a handful of Occupy protesters charged with blocking a road last winter at the Port of Hous­ton would be dismissed. If that happens, the APD will not have to reveal the names of two undercover officers who were part of a three-investigator contingent that worked to keep tabs on the activities of Occupy Austin members; the department would like to keep those two names confidential. Unfortunately, it does not appear that the Harris County District Attorney's Office is interested in what the city or APD wants. During a court hearing Oct. 4, Assistant D.A. Joshua Phanco told Judge Joan Camp­bell the D.A.'s office is "prepared to turn over those two names" and to move forward with the case against the Occupiers, including OA member Ronnie Garza.

At issue is whether the undercover APD officers induced Occupiers to commit felony obstruction of a roadway by proposing, purchasing, constructing, and delivering for use a so-called "lock box," a device fashioned out of PVC pipe, hooks, and chains that is designed to link protesters together and to make it difficult (if not dangerous) to separate them. Garza and other protesters claim the undercover officers, including Shannon Dowell – aka "Butch," the only one of the three officers who has been publicly outed – actually compelled the protesters to use the device. Without their inducement, argues Garza's attorney Greg Gladden, Garza and the other protesters facing felony charges simply would've linked arms to block the road – a move that would've netted them a misdemeanor charge, the same charge other protesters arrested that day are facing.

Dowell was ordered to court on Aug. 27, but testified that he had no documentation concerning his involvement with OA; indeed, Dowell testified that he'd lost on his way to court a thumb drive containing pictures related to the case. Judge Campbell did not seem impressed; since then the city of Austin has turned over a number of documents for her inspection, including Suspicious Activity Reports filed by the undercover officers with the Austin Regional Intelligence Center, the so-called "fusion center" designed to combat terrorism, gang activity, and more. In a ruling made from the bench on Oct. 4, Campbell ruled that all those documents will be made available to the defense – and that Dowell's two cohorts, nicknamed "Rick" and "Dirk," will have to be provided to the defense as well, if the state plans to move forward with its prosecution. "We're subject to the will of the court, and as long as the prosecutors move forward, we'll be responsive to what they need," says APD Assistant Chief Sean Mannix.

The parties are due back in court Oct. 31. For more on the story, see "APD Infiltrates Occupy," Aug. 30.