Council: Of Public Power and Inside Chess 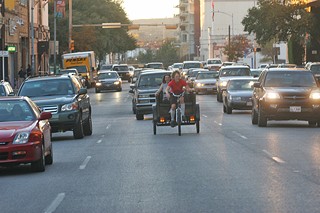 This week's City Council subject most likely to generate public sparks is a triplet: Items 24, 25, and 26. All three concern variations on a theme: a proposal to sell (in one of three staff-proposed transactions) a small piece of city-owned land on Rainey Street for development into a planned parking garage for a multistory residential tower. However, as Amy Smith explains in "Then There's This," p.16, the deal got derailed between the Sept. 27 meeting and this one, when supporters of the Mexican American Cultural Center (with its entrance on Rainey Street) objected to the project as potentially encroaching on the sight lines of the MACC. That also explains the singular Addendum Item 117 to today's (Thursday) agenda, sponsored by Council Members Mike Martinez and Laura Morrison and Mayor Lee Leffing­well, which would withdraw the sale proposals and instruct city management to come up with another plan, ideally under the Parks and Recreation Department.

Items 66 and 68 concern the always-fraught issue of issuing additional taxi franchise permits – these the second reading of a proposal awarding such, respectively, to Lone Star Cab Com­pany and Austin Cab. How to allocate taxi franchises so as to provide sufficient public service without flooding the market has been a perennial council conundrum. That this is only a second reading of three confirms that members have not reached consensus, among either themselves or the interested stakeholders, which include not only the companies but the drivers (effectively independent contractors) and potential passengers, especially customers with disabilities, who say the companies provide inadequate accommodation. (Item 69 would extend a moratorium on additional Downtown pedicab permits until April 23, 2014; we can surmise the Transportation Department considers that related market at capacity.)

The long-disputed TXI gravel mine at Hornsby Bend arrives at the dais via Item 71, an attempt to codify by ordinance the city's role in an agreement in principle between the county and the company. The city, which has extraterritorial jurisdiction over the nearby creeks, would grant road-hauling variances to TXI in exchange for environmental protections and a grant of mitigating open space to the county – with the ordinance not taking effect unless the agreement is confirmed. The ­pieces of the agreement are fairly complex but have been through the Environmental Board (with some tweaks) and the Zoning and Platting Commission. Expect lots of crossed official fingers that, however coun­cil tinkers, this Jenga tower will stay in place.

Recent headline matters bubble up in the form of a proposed extension (Item 79) of council's Special Committee on Economic Incentives (through November) and a direction to the city manager (Item 80) to address the city's proposed "1115 Medicaid Waiver" projects (tied to the Central Health med school proposal). The scheduled morning briefings include a reprise of the four Waller Creek design competition proposals (with a selection announcement expected next week), and the annual report of the city of Austin survey by ETC Institute (we're generally very happy, except about the things we're not: for last year's findings, see "Beside the Point: We Love Us!" Nov. 18, 2011).

Postponed from the Sept. 27 meeting and landing here instead is an unusually long list (Items 105 through 116, less 115) of annexations, including the Circuit of the Ameri­cas 1,584 acres (currently in the ETJ) and the would-be BFI transfer station tract (aka the Wells Fargo Tract) at highways 290 and 130 (see "Then There's This: Sunset Landfill Rises Again?," Oct. 5).

If they get through all that business, and undoubtedly a few other vexed questions, at 5:30pm Council will hear Aaron Tinjum & the Tangents and celebrate Public Power Week, Arts and Humanities Month, Toast­masters Recruitment Month, and National Chess Month, among other proclamations.