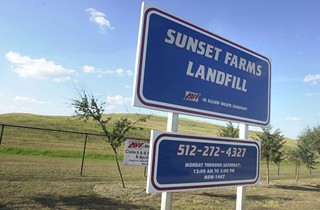 Sunset Farms Landfill may be closing its doors, but its owners hope to stick around. (Photo by John Anderson)

November 2015 can't get here soon enough for Northeast Austin neighbors of the Sunset Farms Landfill. That marks the end of a 2009 settlement agreement between the city and the long-reviled site on Giles Road.

But a tangential wrinkle in the agreement has prompted the city to initiate annexation proceedings on a nearby tract that the landfill's operators, BFI Allied Waste Ser­vices (owned by Republic Services) recently acquired on the cheap from Wells Fargo Bank.

BFI may be losing a landfill, but it aims to hold on to its regional waste business by building a recycling facility and transfer station on the newly acquired site, where collection trucks would shift their loads onto larger vehicles to haul to other landfills.

A transfer station is clearly something city officials didn't anticipate when it agreed to withdraw its opposition to BFI's request for an expansion permit. That surprise settlement angered opponents, because it allowed the landfill to continue expanding vertically, creating a massive tower of trash in the interim years before its 2015 closure.

The BFI tract, located on the southwest corner of Highway 290 East and State Highway 130, is a late addition to the list of 11 properties slated for proposed annexation hearings before City Council on Oct. 11 and Oct. 18. (The higher-profile Formula One racetrack property in southeast Travis County is also on the annexation agenda. For a complete list of proposed sites, go to www.austintexas.gov/department/proposed-annexations.)

While a transfer station and recycling facility may seem like a logical business solution for a waste management company, the proposal runs counter to the city's Imagine Austin plan, a land-use planning roadmap for the future. In fact, the burgeoning 290/130 intersection is identified on the city's growth concept map as "major activity center," an area deemed suitable for an increased concentration of job centers, commercial businesses, and residences.

Should a new waste-related facility also figure into that equation after annexation, BFI would have to adhere to stricter land-use regulations – over which the county has little control – and undergo a more arduous permitting process. To navigate those waters at City Hall, the company has hired seasoned real estate lobbyist Steve Drenner.

News of the waste company's plans doesn't sit well with Pete Dwyer, one of the partners of Wildhorse Ranch, a master-planned community being developed adjacent to the BFI property. After BFI closed on the property this past spring, company reps contacted Dwy­er to let him know they were his new neighbors. As Dwyer recalls the conversation, "They said: 'We've got this piece of land, and we're going to do this really cool solid waste transfer station. What do you think of that?'"

Dwyer said he asked them if they had done any scientific studies that examined route maps and compatibilities in advance of buying the property and they said they had not. "I just can't conceive of this type of use coming into that site because, for two years now, the [Imagine Austin planning process] has been vetting various and sundry development criteria, and that intersection is the designated northeast major activity center. That's the biggest [activity center] on the map, and they're smack dab in the middle of it." Dwyer said he told them their plans were "terribly inappropriate" for the site.

With Drenner going to bat for BFI, Dwyer has retained attorney David Armbrust, an equally formidable City Hall land-use lobbyist. Dwyer also asked another City Hall veteran, David Butts, to do some public outreach work on the proposed annexation of the site.

Lee Kuhn, regional general manager for Republic Services, said his company has been very open about their proposal for a "multi-purpose recycling facility." The plans, he said in an emailed statement, "are directly aligned with the community's desire to reach a 'zero waste' status." He added that the property's size allows for expansive buffers on the site, and that the overall plans are sensitive to surrounding tracts.

"Whether the tract remains in the City of Austin's extraterritorial jurisdiction or is annexed into the City," Kuhn wrote, "we hope to be able to move forward with our development plans for this tract without delay."

With two high-powered lobbyists and strong arguments on both sides, delay is the one thing that is certain. 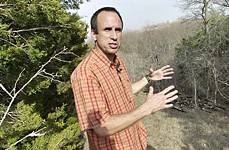 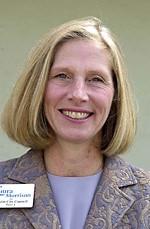