HID Global is getting some economic incentives, but expect the policy on that to change soon 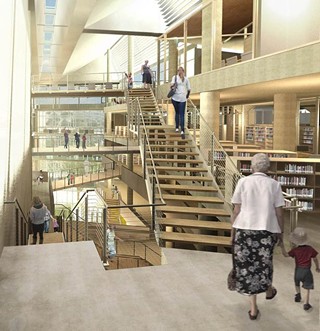 Council was briefed last week on design plans for the new central library, an anchor feature in the redevelopment blueprint for the Seaholm Power Plant District along West Cesar Chavez. In addition to computers and other types of technology, the six-story, $120 million facility will feature lots of natural sunlight, reading nooks, an airy atrium (pictured), an "event forum" on the ground floor, as well as a bookstore, where old library books will be sold. Ground breaking is set for next fall with a spring 2016 completion date. (Courtesy Lake|Flato Architects)

The question reverberating out of City Council this week is a perennial one: Whither economic incentives? The issue at hand is a relatively small incentives package for a security company called HID Global – it manufactures security IDs, parking passes, and the like – and they've applied for incentives (over 10 years) from the state's Texas Enterprise Fund ($1.9 million, already promised), Travis County ($745,000), and the city of Austin ($920,000), in return for 276 jobs at a Northeast facility and an estimated net return to the city of $2.3 million. By the standards of big tech players like Apple or Samsung, it's not a major deal, but as negotiated by city staff it's also apparently less flexible: When council members (encouraged by public testimony and in particular Workers Defense Project activists) pressed company reps on paying prevailing wages for project construction jobs (as has been negotiated on other projects), the company did not embrace the notion. And since the city's current incentives policy – historically a moving target – does not explicitly include prevailing wage as a requisite standard, changing it from the dais is a touchy business.

Council eventually voted unanimously to approve the package, not without some pushback from CMs Mike Martinez, Laura Morrison, and Kathie Tovo – who not coincidentally comprise the special council subcommittee currently working on a revision of the policy. Judging from the discussion, some kind of prevailing wage standard is likely to be part of that new draft policy.

Yet another issue is whether there's any guarantee that HID Global hires will be predominantly "local" (i.e., Austin or Travis County) and aimed at low-income workers, a question taken up by County Commissioner Sarah Eck­hardt in advance of Commissioner's Court considerations of the deal. Commissioners elected to approve the incentives over the objection of Eckhardt, who said the agreement should include better guarantees for local hiring.

Whatever happens, we can bet this is far from the last word on incentives. Samsung is already dangling more investment beyond its 10-year deal, provided (it told legislators last month) the state renews the company's substantial property tax breaks. The city will undoubtedly be asked to join the queue.

Council also voted, essentially by acclamation, to endorse marriage equality – symbolism, but important symbolism. It received a brief video glimpse of the Seaholm redevelopment project and new central library, and it authorized (on first reading only, and with plenty of misgivings) additional franchise permits for Lone Star Cab Company and Austin Cab, in the ongoing attempt to resolve the taxi controversies (more to come). It also punted several items for a couple of weeks down the road, including a proposal to sell for development a small tract of land on Rainey Street – right smack in front of the Mexi­can American Cultural Center, threatening the Center's sight lines; MACC supporters are not amused.

There's no regular meeting this week, but the early agenda for Oct. 11 promises more about the would-be MACC neighbors as well as taxi permits, and plenty more, including a brace of potentially controversial annexations (see "Then There's This," p.16). Pretty pictures and PowerPoints, too: The morning briefings feature a reprise of the Waller Creek Design Competitions (the full presentations were held Wednesday, Oct. 3, in council chambers) followed by the annual ETC Institute survey of Austinites: Whaddya bet we like public safety a whole lot?