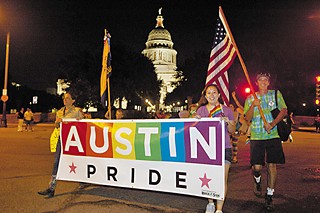 The feel-good proposal on Thursday's City Council agenda (Sept. 27) is Item 77, an endorsement of marriage equality in the state of Texas. Sponsored by Mayor Pro Tem Sheryl Cole and co-sponsored by Mayor Lee Leffingwell and Council Member Laura Mor­rison, the symbolic resolution is unlikely to raise much dissent in the chamber and certainly none on the dais. It cites the historical, moral, and political reasons for same-sex equality – notably, the Bill of Rights of the Texas Constitution, which says rights cannot be restricted only to certain people – and should be recommended reading for all Austinites.

In roughly the same vein, Item 80 (Cole, Leffingwell, and Council Member Kathie Tovo) would direct the city manager to prepare and file an amicus brief in support of area school districts suing the state over the inadequate funding of public schools (the latest round of lawsuits stretching back a couple of decades). Said Cole in a press release: "The outcome of the school finance litigation dictates our city's quality of life. Without an educated population, we do not have a well-paid workforce, without which we do not have a tax base and do not have funding for transportation, public safety, or parks" – sentiments echoed by her co-sponsors.

There are, of course, plenty more civically contentious matters on the agenda. The morning briefings (97 and 98) are on the Seaholm redevelopment and New Cen­tral Library, and on climate change (presumably, prevention thereof). Item 140 is another economic development (i.e., incentive) deal, this time with HID Global Corporation (the city's portion of the 10-year, $3.1 million state/county/city deal would be about $920,000 in property tax rebates); pressure is building for more restrictive "hire locally" standards for the 276 promised jobs. Taxi franchise permits (Item 72), low-speed electric vehicles (74), and pedicab regulations (142) are also likely to raise a few eyebrows, and at its Tuesday work session, council was attempting a "time-certain" schedule to enable more public input.

On environmental fronts, Item 83 would direct city staff on energy efficiency planning and public engagement; 87 would recommend yanking SH 45 off of the current Capital Area Metropolitan Planning Organization agenda pending better research data; and 88 would direct Watershed Protec­tion staff to weigh in on the U.S. Fish and Wildlife Department's proposal to add the Austin Blind and the Jollyville Plateau salaman­der to the Endangered Species List.

All in all, plenty of occasion for energetic debate – all this, and a 5:30pm performance by Tapestry Dance Company.