Cleve Foster was convicted of a 2002 rape and murder

Cleve Foster, a Desert Storm veteran turned Army recruiter in Fort Worth, is slated to be the next inmate executed in Texas. 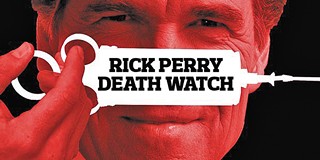 Foster, known as "Sarge," and one of his recruits, Shelton Aaron Ward, were each convicted of the 2002 rape and murder of Sudanese immigrant Nyanuer "Mary" Pal. The two were seen talking to her in a bar shortly before her murder; the three left at the same time, and Foster and Ward followed Pal as she drove off in her car. Pal's body was later found in a ditch by workers laying pipe.

Ward died in prison, reportedly of brain cancer, in 2010. Foster has maintained his innocence, and argued that he had an incompetent trial attorney who failed to present expert testimony supporting his innocence claim – and that his state habeas attorney was also incompetent for failing to raise on appeal the ineffectiveness of his trial counsel. In several statements Ward repeatedly claimed that he alone murdered Pal, but prosecutors have said Ward's statements are inconsistent with the evidence. DNA evidence showed both men had sex with her before her death, but Foster insists he was passed out from sleeping pills and wasn't involved in Pal's killing. Indeed, Foster was tried and sentenced to death not for directly killing Pal, but as a party to the crime. Under Texas law, if a person knows or could have anticipated that a crime would occur, he can be charged as a party to it, even if he has no direct physical connection to the crime or any intent to commit it. (For more on Texas' law of parties, see "Wrong Place, Wrong Time," Feb. 11, 2005.)

Foster had three dates with death in 2011, each stayed while the court considered his appeals, which have each been denied. His case is headed back to the 5th U.S. Circuit Court of Appeals, where he will again argue that his state habeas attorney was incompetent for failing to raise the ineffectiveness of his trial attorney; the U.S. Supreme Court, in an unrelated case earlier this year, concluded that this could be grounds for relief. If the 5th Circuit fails to act, Foster's case will head to the Supremes for consideration. His execution is scheduled for Sept. 25.

At press time the Supreme Court had not yet decided whether it will stay the execution of Robert Wayne Harris, who is slated for execution Thursday, Sept. 20. For more on Harris' case see, "Death Row Inmate Hoping for Supreme Intervention," Sept. 14.