Aside from all of this, it's impossible to separate Central Health's request for a tax increase – and anything that it might fund – from the facts on the ground. In Texas, a lack of state funding leaves local jurisdictions with something worse than an unfunded mandate – that is, a gaping hole in what was already a system riddled with gaps, especially in behavioral health care. It's part of an unstated policy that finds politicos at the local level begging – or stuck in the position of being the ones who raise the taxes.

Dr. William Sage is a health care policy expert with law and medicine degrees who is also the Vice Provost for Health Affairs at UT-Aus­tin. As he sees it, the University, Cen­tral Health, and Seton will be stepping in to fill a troublesome void – one of "an inefficient health care system."

"It isn't a Texas problem; it's a national problem," he says. "It's acute in Texas, because we've got a rapidly growing population with vast geographies and highly vulnerable health infrastructures."

According to Central Health, one doesn't have to go very far to see the sort of program envisioned for Austin. Communications officer Garbe says that, during its deliberations, Central Health's board of managers kept returning to one effort in particular: The University of Oklahoma at Tulsa and its School of Com­mun­ity Medicine. In 2010, the president of that institution, Dr. Gerard Clancy, released a report called "Health Equity and Building High Performance Health Systems for the Underserved and Vulnerable in the Era of Health Reform: Going 'All In' for the Health of Underserved Com­mun­ities." In it, Clancy lays out seven recommendations for creating high-performance health systems specifically to meet the needs of vulnerable and underserved populations. Recommendations 2 and 4 sound familiar: "Creation of a collaborative of medical schools and underserved communities for joint design, learning and replication of successful health improvement and efficiency initiatives," and "the combining of funding opportunities from across multiple federal agencies to support the workforce, access to care, quality and efficiency initiatives within these pilot projects."

"To improve health – rather than simply health care – most agree that we must take a broader view," Clancy writes. "For many, this approach looks at preventive health and early health interventions. Although attention to these is warranted ... [some say there is] the need for even earlier involvement and interventions to improve health. ... [M]edicine as a profession has an important role, but not THE sole role in making improvements in health. Here, medicine will need to work with early childhood education, public education, social work and even law enforcement to advance health."

Will It Help Dove Springs?

Clancy's argument – for Austin purposes – is aimed directly at one of the most underserved communities in the city. 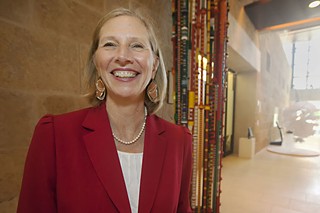 Dove Springs sits in an area of southeastern Travis County that is underserved in about as many different ways as "underserved" can mean. Area residents say they've been waiting for a full-service public health clinic for 20 years. In 2008, Dove Springs finally got a clinic in a strip mall at the intersection of I-35 and William Cannon – but it has become effectively an urgent care facility. According to the website for the location, the clinic's staff can serve "cough, cold, or sore throat" needs, tend a "twisted or sprained ankle," and/or perform "minor procedures to include toenail removal."

On a Friday afternoon in mid-August, neighborhood activist Ofelia Zapata, Austin Interfaith and the Wildflower Unitarian Church's Kurt Cadena-Mitchell, resident Isabel Rios, and Leonor Vargas, a social worker attached to the Mendez Middle School's Family Resource Center, met me at the trailer that houses the resource center. Zapata noted that though "study after study" illustrates "a big need" in the Dove Springs neighborhood, residents "have not been successful in securing the health facility that we need."

Vargas says that, in a 2011 survey of 676 out of 750 Mendez Middle School families, 41% of respondents acknowledged some kind of ongoing medical issue; 26% reported mental or behavioral health issues. She added that, for residents in need of more comprehensive or mental health community care, the closest available facility is on South First Street – a long bus ride from Dove Springs. It can take "a full day just to go for a one-hour appointment," says Vargas. And she says the Dove Springs clinic is "not somewhere I would take my child to be followed by a doctor."

Collectively, Zapata, Cadena-Mitchell, Rios, and Vargas are looking for a comprehensive change. Zapata calls for a "holistic approach," that would address the public safety needs that keep the neighborhood kids inside, as well as the obesity issues that are locally prevalent. Even after 20 years and with a relatively new clinic, the truth, Zapata says, is frustrating: "We still don't have what we need to meet the needs of the community."

Which is to say that, despite evident health care gaps, it's not more doctors alone that the community needs.

Austin City Council Member Laura Mor­ri­son, who has worked on childhood obesity and other health-related issues in Dove Springs, has been working with the community and City Manager Marc Ott to address some of the issues through an update of the region's neighborhood plan. "That would allow us to look at really big picture things about what is connectivity, and transportation, and are there some areas that we could really try and enliven like neighborhood corners and centers, so that people have gathering spaces and community spaces," she says.

Morrison's views align with those of Zapa­ta, Cadena-Mitchell, Vargas, and Rios. "One other fundamental issue before any of this is going to work," she says, "is public safety, because guess what? People are not going to go outside, not going to ride their bike to the store, they're not going to go to a community garden if they don't feel safe." Zapa­ta says that she and her neighbors will hold Central Health "accountable to its mission." Cadena-Mitchell is more direct. "Our commitment is to the full medical home," of Austin Interfaith, he says. "We want all levels of government to ensure that happens."

"It's not just the absence of disease," Cadena-Mitchell continues. "It's being able to live fully healthy lives."

There are two conversations taking place in the run-up to the November vote. The more general one is about social commitment to community needs. The specific one is about a medical school, and what it could do for Austin, Travis County, and the region. But that also means specific neighborhoods, specific residents: Dove Springs, Montop­o­lis, Northeast, St. Johns, Central East. It remains to be seen whether all parties concerned can come together for the transformative events imagined and required by federal mandate (via those 1115 waivers), and demanded by residents who live in those underserved neighborhoods.

Gov. Perry and his wing of conservative Texas policymakers see an expanded Medicaid – including the promise of Pres­id­ent Barack Obama's U.S. health care overhaul, which also figures into this regional picture – as a luxury Texas simply cannot afford. The Legislature, or at least its current majority, seems all too eager to follow Perry's lead. When Perry grandiloquently rejected Medicaid funds that he charged had "too many federal strings attached," there was no effective legislative opposition. The result looks something like an un-overlapping Venn diagram, with the federal circle on one side, the local health care circle on the other – and a big empty space that represents where the state won't allow the feds to use their considerable fiscal potential.

For all the questions, changes, policy papers, studies, and rhetoric, Dove Springs residents live at the whim of a system that still isn't quite sure about how to support them. More doctors could certainly offer the citizens of Dove Springs a medical home closer to their front door. And that is certainly part of the solution. But it still leaves public gaps: gaps in transportation, gaps in public safety, gaps in readily available healthy food. And that's the sort of needed comprehensive infrastructure improvements that tax dollars from the city and county – not just Central Health – might help pay for.