HHSC intends to have rules in place by Nov. 1 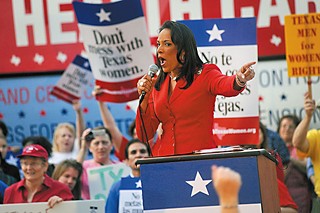 At a public hearing Tuesday, supporters of the current Women's Health Program expressed concern that new rules for a revamped, state-run program would cause the provider base to dwindle, would interject government into the doctor-patient relationship, and could potentially leave thousands of poor women without access to basic health care or family planning services. But unless the political will in the Governor's Mansion changes – and tips a consequent shift in the Health and Human Services Commission, which must sign off on the rules – it appears inevitable that the rules will take effect by Nov. 1, if all goes according to HHSC's timeline. Under the new WHP, the state will pay the tab for services, doctors will be forbidden from discussing abortion with their patients, and Planned Par­ent­hood will be excluded as a provider.

That worries Alexis Lohse, a college student and working mother of two. "I have five college classes, two part-time jobs, two kids, a busy husband, lots of plans, and one health care provider" – Planned Parenthood – she said in testimony before two associate commissioners of the Department of State Health Services, which hosted the hearing. Thanks to her enrollment in the current federal-state partnership WHP, this summer Lohse received her first well-woman checkup in four years. If the state implements the new rules it's planning on, she isn't sure what she'll do. "Who I choose as my health care provider is not the Legis­lature's business," she said.

Lawmakers joined the standing-room-only crowd at Tuesday's hearing, asking the state to reconsider its position, which could leave nearly 50,000 women currently receiving WHP services through PP without a medical provider. Thanks to low doctor reimbursement rates, several lawmakers, including state Sen. Kirk Watson and Reps. Dawnna Dukes, Donna Howard, and Elliott Naish­tat, expressed concerns that there won't be enough providers willing and able to pick up those clients. The new rules also include a ban on any discussion of abortion between provider and patient, a restriction that Sen. Sarah Davis, a Houston Republican, says invades the doctor-patient relationship and could drive additional providers away from the program. Indeed, the Texas Medical Association and other major doctor groups have written to the state to express their concern over the rule, which could "gag" doctors from discussing abortion with any of their clients, not just those enrolled in the WHP. "We strongly oppose any interference into a physician's ability to use his or her medical judgment as to the information that is in the best interest of his or her patient," reads the letter.

The nearly four-hour hearing, prompted by requests from state lawmakers, brought passion on both sides of the issue, but of the more than 200 who initially packed the hearing room, a majority spoke passionately against the proposed rule as an attack on women and their access to health care. "Facts, law, [and] data have no place in Tex­as," Sheila Sorvari testified. "These numbers don't add up. This is not the Texas I used to live in." That Texas was "not willing to literally put women's lives at stake" just to satisfy political positions. "So I guess I'm just a temporary Texan, until I can find somewhere more American to live," she concluded.