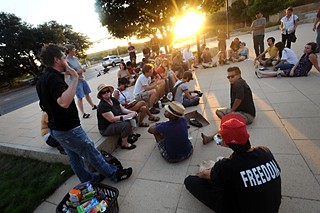 › Speaking of budgets, Capital Metro has proposed a FY 2013 budget of $274.4 million, which it describes as "balanced without reducing service levels or raising fares." Public hearings and open houses are scheduled throughout September, with a board vote on the agenda for Sept. 24. Details at www.capmetro.org/budget2013.

› The city of Austin is back in Stage 2 drought status, just six weeks after lifting outdoor watering restrictions (over objections from environmentalists). Under Stage 2, residents and businesses are limited to once-weekly yard-waterings.

› The Longhorn Network is reaching more Austin homes after striking a deal with AT&T U-verse; previously, the only local carrier was Grande. However, after a year of broadcasting, the ESPN-run network is still not carried by Time Warner, Dish, or DirectTV.

› Did an undercover Austin Police detective induce members of Occupy Austin to commit felony obstruction of a roadway during a demonstration in Houston last December? Or did he and two colleagues intervene in the interest of public safety? A hearing pending in Houston has been postponed until Sept. 25. See "APD Infiltrates Occupy."

› At a standing-room-only Tuesday hearing, supporters of the current federal-state partnership Women's Health Program spoke out against the Health and Human Services Com­mis­sion's proposed rules for a new version that would be exclusively state-run, exclude Planned Parent­hood as a provider, and prohibit all discussion of abortion; see "Lawmakers, Citizens Speak Against Proposed Women's Health Care Rules."

› Travis County district judges have named a new county auditor to replace veteran Susan Spa­ta­ro, who was forced out of her position. The judges didn't have to look far: Successor Nicki Riley used to be a chief assistant to Spataro.

› Sealing his reputation as the Democrats' leading hope in Texas – and potentially beyond – San Antonio Mayor Julián Castro gave the opening night keynote speech at the Democratic Nation­al Convention on Tuesday, Sept. 4. Chronicle cartoonist Jen Sorensen is reporting from the field; see "DNC Roundup," and follow along on Twitter @SorensenJen.