Then There's This: Pool Plan Panned and Lauded 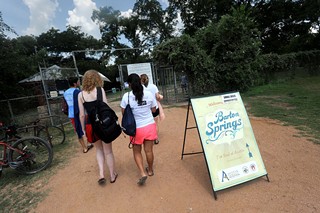 You think these people care what the south gate looks like? (Photo by John Anderson)

The good news? A grounds improvement plan for Barton Springs Pool that got a thumbs up this week from two city panels is better than the much more elaborate and expensive plan that was initially kicked around.

The Historic Landmark Commission approved the scaled-down proposal on Monday, and the Parks and Recreation Board signed off on it Tuesday, with a recommendation that planning consultants rethink the design and placement of an accessible path and overlook on the pool's south side – which somehow ended up with the most dramatic alterations. It's not been determined when the item will go to City Council, which has the final say.

In addition to the construction of a granite path and overlook for people with mobility limitations, other changes to the back entrance include replacing the existing ticket booth with a larger prefab booth, building a new fence – with wrought iron in one section and wire mesh in another – and also a grand entry gate made of woven wire mesh flanked on either side by limestone columns. Pretty snazzy, eh? You could argue that the existing chain-link gate works just fine, but the currently proposed version beats the two over-the-top design options that had also been considered. The new fence work will also expand the south grounds by about 60 feet to accommodate the new pathway.

There's still the question of why we'd change anything on the south grounds – the unpretentious back entrance from Robert E. Lee Road that leads to a tree-covered hillside overlooking the pool. This is the side where young people and regulars like to hang out and show off to their friends from out of town. In its natural state, it's the closest thing to an old Texas swimming hole that many people will ever see.

The parts of the proposal that address the pool's main entrance in Zilker Park aren't as contentious, because the plan for now only calls for maintenance work – smoothing out some wear-and-tear spots on the Philosopher's Rock sculpture, and rescuing some trees by removing 12 inches of granite to loosen the soil and reinvigorate the root zones. A concrete sidewalk will be replaced with a slightly elevated walkway designed to stave off future damage to the roots. New trees and landscaping will also be planted.

The overall grounds project is a component of a 2009 council-approved master plan that has deeply divided a community of longtime Barton Springs swimmers. A little background: The idea for the pool's makeover started to take form in 2006 after the formation of Friends of Barton Springs Pool, a nonprofit group that heads up regular pool-cleaning efforts. The group's leaders took the idea to City Council, which freed up some money for a consultant to draw up what turned out to be an overambitious master plan; it even included the construction of a bath house at the south entrance, which caused a good deal of turmoil between two factions of swimmers.

The council ultimately approved only the short-term projects and held off on the long-term endeavors, such as the new bath house. Additionally, parts of the master plan were rewritten to include a key passage that, for whatever reason, has been completely ignored by the consulting team hired to craft the grounds improvement plan as well as the city panels that have endorsed it. They can't exactly claim ignorance of the passage because the people who oppose (to varying degrees) developing the south side point to it at every opportunity. It reads in part: "Because the South Lawn is such a beloved feature, care should be taken to avoid temptation to either re-imagine it or to use it to solve functional problems."

Reimagining how it could look in a gentrified state perhaps proved too tempting, once development plans on Barton Springs Road began making headway – an eight-story office and retail building on one side of the street (controversial by virtue of its size), and a high-end apartment complex on the other side, replacing what used to be a trailer park.

It's been argued that the "enhancements" to the pool's south side will convince future generations to treasure Barton Springs as much as we do now. But enhancements like the ones proposed here have a tendency to grow and multiply, what with consultants and their friends' fees and so forth. And before you know it, a private company will have to step in and run the thing because the city can't afford the upkeep of a treasured public asset. My best advice? Leave it alone. 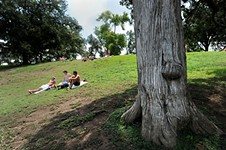 Then There's This: Showdown at the Springs
Does the pool's south side need a makeover?