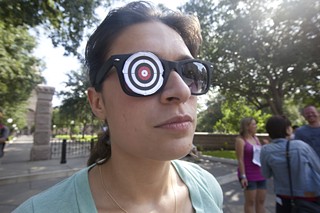 Dana Yanoshak wears a target at an Aug. 25 demonstration at the Capitol to protest an appeals court ruling that cleared the way for Texas to exclude Planned Parenthood health clinics from the Women's Health Program. (Photo by Jana Birchum)

• City Council meets today (Thursday) for its last formal budget hearing – including both departmental appropriations and the proposed tax rate (a 2.18-cent increase). See "A Whiff of Prosperity," and "Council: The Budget Sing-Along."

• The Austin Independent School District board of trustees adopted its 2012-13 budget Tuesday, deferring any property tax election for now, keeping the current tax rate, and deciding to underwrite a one-time 3% raise for employees from reserves, rather than making it permanent.

• Local activist Antonio Buehler was arrested Aug. 26 while filming an arrest. Police say Bueh­ler refused to back off; his attorney claims the arrest was retaliation for Buehler's criticism of police action in an unrelated case. See "Peaceful Streets Founder Arrested."

• Mexico President-elect Enrique Peña Nieto this week filed with the U.S. Supreme Court an amicus brief encouraging the justices to consider the appeal of Rosa Jiménez, convicted in 2003 of choking toddler Bryan Gutierrez with a wad of paper towels. See Newsdesk blog, Aug. 29.

• Gov. Rick Perry Tuesday appointed former Rail­road Commissioner Michael Williams to head the Texas Education Agency, although his only "education" experience was as a George H.W. Bush appointee to the civil rights division of the U.S. Department of Education.

• Lt. Governor David Dewhurst announced Tues­day that he expects to run for re-election in 2014, despite his embarrassing senatorial primary defeat by former Solicitor General Ted Cruz. Dewhurst's likely opponents had been hoping that his move to D.C. would clear the way for challengers. No such luck.

• On Tuesday, a D.C. federal district court rejected Texas' congressional and legislative redistricting maps, ruling that there is strong indirect evidence that the maps were drawn with the intention of discriminating against minority voters, illegal under the U.S. Voting Rights Act. Temporary maps are still in place for November's election.

• Hurricane Isaac, less powerful but broader than 2005's Katrina, slowly churned northward into New Orleans Wednesday morning. It is expected to linger on the Gulf Coast until Friday.