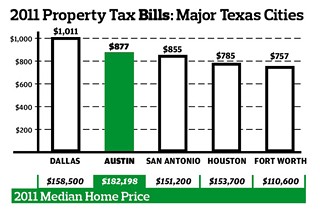 Tax Bills (based on a median-priced home) 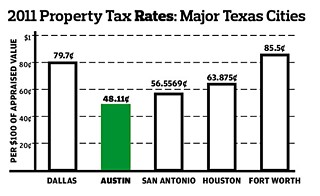 These two charts show the Austin tax rate in comparison to those of other major Texas cities – and also the tax bill, based on the median values of homes in each of the cities. Note that the Austin tax bill, for a 2011 median priced home (at $182,000, the highest of the five-city list) is second in the cross-city ranking. On the other hand, Austin's tax rate for 2011 ranks lowest of the five cities, and the new proposed rate of 0.5029 would still rank lowest, by a considerable amount.

N.B.: For a majority of city residents – who are renters, not homeowners – this conventional "median-priced home" comparison is not terribly helpful. Property tax rates are indeed reflected in rental rates but there are no readily available indicators of the potential changes.