Then There's This: Ousting the Auditor 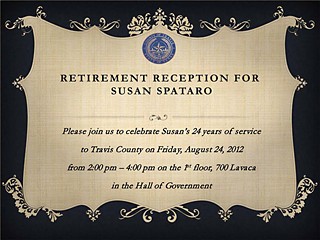 Travis County Auditor Susan Spataro has until the end of the month to box up her things and vacate her new digs at 700 Lavaca. That was the order handed down last week by 15 state district court judges, who voted unanimously for her termination. More politely, they voted not to reappoint Spataro to her position as Travis County Auditor.

What a way to end 24 years as a public servant.

While she is eligible for retirement, Spa­ta­ro, at 68, wasn't ready to stop working, especially since she was in the middle of a massive overhaul of the county's financial software system. Beyond that, Spataro wasn't ready to leave a job in which she wielded a substantial amount of power and influence over policy-making decisions.

Which is precisely why it was time for her to go, some people believe. In Texas, district judges have oversight responsibility for the county auditor's office – theoretically to ensure the auditor's independence and objectivity. In this case, the judges apparently hadn't been minding the store.

As an unelected official whose job it is to bird-dog the county's finances and spending practices, Spataro's role had morphed over the years into a quasi comptroller and adviser to county commissioners, who sought and valued her recommendations. Only recently, Commissioner Sarah Eckhardt was the lone voice against Spataro's involvement in an economic development decision relating to Formula One, arguing that her participation could impair her objectivity as an auditor.

From a reporter's view, Spataro, a technical number-cruncher, was a valuable resource for breaking things down in layman's language. And until this week, she was always quick to respond to phone calls.

Commissioner Karen Huber says Spataro is largely responsible for the county's AAA bond rating and its good financial health. Plus she admires Spataro's fearless frankness. "Susan calls a spade a spade, and I actually appreciate that. I value her opinion whether I have agreed with it or not, and [her opinion] didn't always sit well with people."

At their meeting Tuesday, commissioners honored Spataro's service and gave county employees a cathartic platform to praise the outgoing auditor's attributes as a boss and a colleague. Later, commissioners plowed into an agenda item to address the potential adverse affects of terminating the auditor, who also happens to be leading the implementation of a new financial software system that's supposed to be up and running by Jan. 1; if things go awry, the delay could carry a heavy price. (Even before Spataro's dismissal, some employees were privately grumbling about the new system's tendency to flake out.)

When he appeared before the district judges Aug. 15 to speak on Spataro's behalf, county Bud­get Director Leroy Nel­lis, who's retiring next year, reportedly reminded the jurists that they don't have accounting degrees, implying they may come to regret their decision. While colleagues say Nel­lis was fuming over the judges' actions, he tempered his remarks in an email to the Chronicle on Wed­nes­day, saying it's time to "move forward" despite the county's loss of an "extremely talented and knowledgeable employee at a time she and her office are in the middle of a $26 million ... financial system conversion. Any delay in the ... implementation of the payroll component of that system could cost Travis County an additional $2.25 million," he wrote. It's been suggested that commissioners may find another place for Spataro at the county, regardless of how the new system fares.

Despite the apparent suddenness of the auditor's dismissal, Spataro and others surely saw the axe coming. The judges started making moves toward termination last summer when they grilled Spataro on, among other things, her ballooning budget ($9.2 million), the size of her staff, the costly security system she ordered for the auditor's office, and the retention of a legislative lobbyist, even though the county has its own lobbying firm to do its bidding at the Capitol. Hiring the lobbyist without giving her bosses a heads-up may have been her greatest mistake, many believe.

From that point, the number of burrs under the saddle kept adding up. Some theorize that Spataro may have gotten crossways with some of the judges over how to proceed with the construction of a new courthouse, and whether the county should enter into a public-private marriage to expedite the process. Spataro has been more of a public-ownership advocate, as demonstrated by the stand she took several years ago against privatizing the collection of delinquent tax payments, one of the county's most profitable operations.

Fortunately for Spataro, she's a toughened veteran of conflicts with elected officials past and present. Her most high-profile skirmish was in the late Nineties, when former County Judge Bill Aleshire wrote and widely disseminated a 22-page memo that challenged her competence and her ethics, questioned her handling of her office's budget, and accused her of "operating with political and personal prejudice." Aleshire says he still stands by "the truth of the memo," though the two have since patched up some of their differences.

"I did come to sincerely regret my personal conflict with Susan," he said, adding: "Her budget was and is too large, but she did not set her budget – the district judges did."