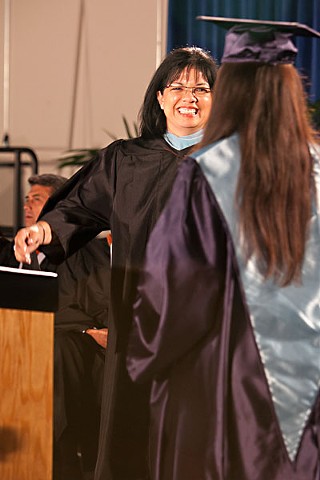 Austin Chronicle: Looking back at the 2010 school year, you'd come out of some success at the International High School and then you deliberately pulled what some people saw as a low-scoring card out of the pack by choosing to head up Reagan. A lot of people would blanch about inviting a reporter on campus in those circumstances. So why did you open the doors to Michael Brick?

Anabel Garza: I've always been one to be very open to what we're doing, because I don't believe Reagan belongs to me. I think it's a public school, and I believe that the public should know what's going on. I had always had somebody, interns coming in from UT coming in and writing about what we were doing, because I'd always thought we'd been doing something unique at the International High School, and the struggles that we faced, and really how hard kids have it when they come to situations
like that.

This year the campus was full of people: We had feds and state and 600 volunteers at any moment in the building. So Allan Weeks, who was our community advocate, he was coming into the school and Michael came with Allan, and he asked if he could write a story about the school, and I said, "OK, sure, go ahead." I thought it would be a good record of what we were doing, and at the end of the story, who knew? I had been in places where I had been able to look over the fence and see what had been happening. I had been at International High School, and we lived on the same campus as Eastside [Memorial], and so I knew what I wanted to avoid. But I wasn't going to have time to write about it. Because if we lost the battle, well ... but if we won the battle, did we keep track of how we went about it so we could help other people do the same?

AC: For you on the ground, what was the point when you said, "OK, we have a grip on this," and then when did you really start to feel that you could see the finish line, that it was reachable?

AG: I always feel like, when you have kids, there's always a chance, and there's always the possibility of a wonderful ending. Although some people don't believe that's possible, I believe it's possible with any – any – kids. Can they all achieve the same way? No. We're not all at the Olympics today. But can I go out and do things to the best of my ability, the best of my potential? Yes, because that's my job, to get you there. I'm not the smartest person or the most talented person, but you are, in some shape or form, and I can find it and I can push it and I can help you do that.

I think you can encourage and change kids and teachers, but you have to believe. There can't be an ounce of doubt that this is possible. Those are the people that I had to counsel, "Go to another place where your belief doesn't have to be as strong, because here we have to believe and have no – absolutely no – doubt we can take these kids there. They had to learn how to believe in themselves, and the adults had to learn to believe in themselves. We had very inexperienced teachers, and that was by choice. Because I didn't get the experience necessary to do the job, but I got the heart. When you have the heart, you have everything, and the rest will come in time. That was all I was asking for. Just give me time.

AC: Talking to Michael, he said that getting out from the "academically unacceptable" stamp didn't just mean no more externally inflicted changes. It meant no longer having that letter going out heavily hinting to parents that they should leave. So what changed for you in that first year being classified as academically acceptable?

AG: If you look closely, it's always by a percentage, or by a kid, or by a percentage of a kid. So why should that change everything you believe in and everything you do for all kids? Again, it's all about time, and the time necessary to fix problems that have come as a consequence of poverty and lack of exposure. Every morning, when I take my own child to school, there are lessons, just in the chatting that we do. Some of those kids don't have those opportunities, so how do we fix that?

I was very proud of the effort of the kids, because they were on board. I said, "This is our school, so if you don't do something, we drown." So they were in. You can come to our campus, and we have knuckleheads just like anywhere, but that year, these kids decided that they wanted to stay there and they wanted to put forth the effort that it would take to do that. We took that to heart – go hard or go home. That's so hard to teach kids, that if we just believe, then we can pull this off. That was our mission that first year, and nothing changes with me. We're still on a mission, but now we're pushing higher and harder.

Can our status change? It can change by a percentage of one kid that wasn't on a mission, or came from somewhere else, or didn't feel like it on one day. That's the corner I don't like to be in, because no matter what those numbers look like, I'm going to work really hard for those kids, for the district, for this city, for everybody. Yet one percentage can change so much and can be so damaging for a school, a district, a reputation. We're trying to get past the reputation that the school went bad, and one minute, one second can change that. So I try to maintain, so we don't pull hard left or hard right. I try to hold steady with what's valuable for teaching kids.

Experience? You can't substitute for that. I had a lot of newer teachers who had heart, but now they're a little older. Two years later, I would put them up against anybody. I have some strong academic teams, but we never get credit for what we receive and what we do with them in one year. Their magnificent efforts, their tireless efforts on both halves. I have kids coming in who couldn't speak English who, this year, they're graduating early. They're kids who came from Burma, from Mexico, from Nepal, who didn't even speak the language, but are we celebrating those miracles? 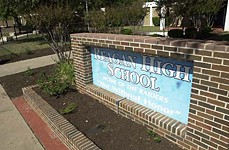