Wildlife habitat yards are supposed to be peaceful places, but they've been causing plenty of headaches for Austin recently. Earlier this summer, families and staff at Martin Middle School were distraught when contractors wrecked their certified garden to remove a portable classroom (see "School's Garden Bulldozed," July 20). However, the school is now working to put the garden back together. Martin principal Leticia Vega praised the administration and the neighborhood, saying, "We have had such a positive response from the community." On July 13, she met with the National Wildlife Fed­er­a­tion, which originally helped fund the project with a $2,000 grant, and got some good news – the garden will retain its Wildlife Habitat certification. The new garden will be on a different section of the campus, and the district plans to have a blueprint ready in September for planting in October. Vega and her staff are assembling a list of native plants for the garden, especially those that will attract local wildlife. She also plans to integrate into the garden lesson plans in innovative ways, like teaching geometry to design the paths and flower beds. Vega said, "We really want to make this an outstanding outdoor classroom for our kiddos, and something that our community will really enjoy."

Yet as one garden is revived, another is under threat – again. Last summer, Coronado Hills resident Laura Croteau woke up one morning to find city staff ripping up stretches of her yard, claiming they blocked sight lines (see "From Shrub to Nub," July 8, 2011). City Council members were so appalled by what happened that they instructed City Manager Marc Ott to revise how Code Compliance dealt with these urban mini-wildlife preserves. But on July 26 of this year, Croteau received several unwanted visitors: Her neighbors told her that five city vehicles were parked outside her house, and around eight city employees were inspecting her yard again. This time it seems it's not Code Com­pli­ance, but the Transportation Depart­ment. On July 31, Croteau received a letter from city transportation engineer Dipti Borkar-Desai, telling her she had 10 days to trim back branches and cut shrubs down below two feet. Croteau is frustrated that the city seems to have invested so much time and energy into her property. She has worked with city staff to stay in compliance, but "now the rule has been changed, so that the same exact plants that were OK by last year's rules are not OK now." Staff at Council Member Chris Riley's office said they are meeting with staff from Code Compliance and Transporta­tion this week to attempt to resolve the situation. 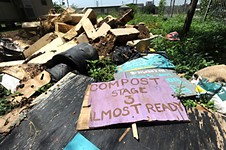 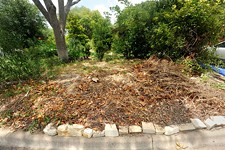 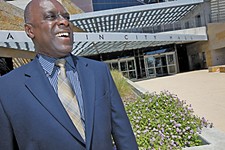 Attempting to Comply
With a new name and a new boss, Code Compliance tries to become more 'people-friendly' 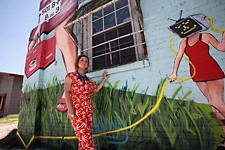