Residential short-term rentals get the go-ahead from City Council 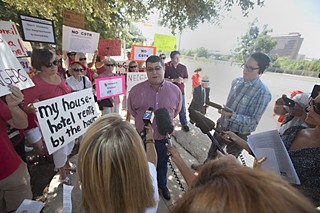 Tom Nuckols, a spokesman for a coalition of neighborhood associations that oppose commercial short-term rentals, speaks to reporters prior to City Council's vote. (Photo by Jana Birchum)

After two years of public debate, City Council discussion, stakeholder meetings, commission input, heated controversy, and unfortunate detours into not-so-low-grade xenophobia, short-term rentals have officially been given the go-ahead in Austin. At their meeting last week, five Council members voted in favor of guidelines to regulate STRs, a way of finally bringing the properties under the jurisdiction of the city's Code Compliance office and cashing in on what could be hundreds of thousands of dollars in uncollected annual hotel occupancy taxes.

The vote didn't come easy, which surprised no one. As they have been for months, Council Members Laura Morrison and Kathie Tovo were the only two voices on the dais at last Thursday's (Aug. 2) meeting speaking out against non-owner-occupied STRs (or, more controversially, "commercial" STRs), properties they say will drive up prices in residential neighborhoods, drive out permanent residents, and drive down school enrollment.

In the end, the ordinance the council approved on second and third reading on Thursday was no different than the one it voted in favor of on first reading back on June 7, except in one regard: Two months ago, Council Member Chris Riley's ordinance put the cap on the number of CSTRs in a particular ZIP code at 3% of single-family residences. Last Thursday, acknowledging concerns from opponents that too many STRs in single large areas could lead to clustering and saturation, Riley amended the ordinance to make the boundaries of the 3% determination the city's census tracts, rather than its ZIP codes.

"Census tracts are smaller than ZIP codes, so they're a more effective way of ensuring there won't be too much concentration of STRs," Riley told the Chronicle. "We can disperse them more evenly." For example, because the 78704 ZIP code encompasses such a large area, it's easy to imagine STRs clustering in small parts of that area, overwhelming its "neighborhood feel." But since there are only 100 detached single-family homes in, say, the West Campus area, only three commercial STRs would be allowed there. It's hard to imagine anyone making a fuss about a mere three STRs popping up in a neighborhood.

Still, if there's anything the long debate over STRs has shown, it's that people will make a fuss (and a serious fuss, too) over pretty much anything when it comes to the neighborhoods they live in. The fight over STRs got particularly nasty over the last few months, with some supporters accusing opponents of wanting to shut down Austin to outsiders, and some opponents giving voice (and signage) to the ugliest kind of us-against-them paranoia.

So, what's next, now that the ordinance has been approved by Council? Will we be putting our acrimony behind us and moving on? Will cooler heads prevail, or will the fight over Austin's neighborhoods move venues to, say, multifamily properties, which the ordinance conspicuously avoids regulating? Or perhaps we'll discuss how to go about implementing the law that is set to go into effect Oct. 1? Will xenophobia creep into those discussions as well?

"There were strong emotions on all sides, but Austin has always been a very welcoming place," says Riley. "And I'm hopeful that as we get the ordinance implemented and we're in a position to register and monitor STRs, that we'll come to recognize their value in helping to accommodate one another. There were times when the discussion was proceeding in a way that was not exactly optimal, but I'm hopeful that we'll all be able to work together."

Both sides will have a chance to fulfill Riley's dream over the next few months, as city staff figures out the best way to actually implement the STR regulations. (e.g., Which city department will handle the newly required registrations? How much should the registration fee be? What is required of a property during inspection by the city?) "The ordinance lays out the parameters for what's required, but doesn't lay out how it gets done," says Jerry Rusthoven of the Planning and Development Review Depart­ment. "That's what we'll be doing for the next two months."

If the last two years are any indication, those two months will find interested citizens standing over staff's shoulders as they do that work. With any luck, they can do so while letting go of some of the nastier sentiments that have bubbled up to cloud what should have been a rational, if passionate, debate and distorted it instead into a battle for the city's soul.

"This issue does strike at some visceral level for some people," says Susan Moffat*, neighborhood activist and one of the most vocal opponents of so-called commercial STRs (and the wife of Chronicle Publisher Nick Barbaro). "People are concerned about the investments they've made in their neighborhoods and their homes. It strikes close to people's hearts. ... Perhaps people weren't always on their best behavior during this debate, but I think it mirrors the national progression into a divided political culture. Everything is a pitched battle, black and white, 'you're the enemy.' Shades of gray and civil public discourse aren't very popular. So with commercial STRs, we keep trying, we try to get the egregious parts taken out of the ordinance, we check back in a year and revisit the issue, and we hope for a better day."

* An earlier version of this story included a quote misattributed to Moffat that has since been removed.