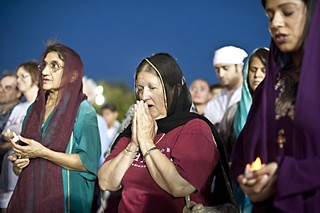 Austin's Sikh community gathered at the Capitol Tuesday for a candlelight vigil in memory of the six victims killed in the weekend shooting at a temple in Wisconsin. (Photo by Sandy Carson)

› City Council has no regular meeting this week, although the Tuesday work session finally approved on third reading an 8-2-1 "hybrid" district proposal for the November charter ballot (to be paired against the 10-1 proposal). Still simmering: bond package, utility governance, and how to cram all this stuff on an e-vote page. See "A Council's Work Is Never Done," and "Steam Still Rising from STRs."

› Austin Police have ruled the May 9 death of Linda Gatica, 36, a homicide, the result of injuries she sustained as a baby in 1976. Gatica had been brought to the hospital with a head injury caused by Gatica's now-deceased grandmother; Child Protective Services investigated but never informed APD about the case.

› Police have arrested 35-year-old Trent Atkinson for the murder last month of Alejandro Hernan­dez, 42, who was found shot to death in his pickup truck in North Austin. DNA extracted from a cigarette butt found in the truck connected Atkinson to the scene. Witnesses alleged that Hernandez had picked up a prostitute and would not let her get out of the truck; Atkinson, reportedly the prostitute's boyfriend, allegedly intervened and shot Hernandez.

› State Sen. Kirk Watson called for a 5-cent property tax increase to underwrite "a medical school, a new teaching hospital ... behavioral and mental health care, and efforts to obtain matching federal health care funds." The Central Health board is expected to make a decision on tax proposals this month.

› The Texas Tribune is requesting that all Texas legislators release their last three tax returns. So far, only two lawmakers – Donna Howard and Elliott Naishtat, both Travis County Democrats – have accepted their challenge.

› GOP nominee for U.S. Senate and presumptive frontrunner Ted Cruz has accepted Democratic nominee Paul Sadler's challenge to a debate. The two lawyers have yet to set a date.

› "Austin Energy and HelioVolt are installing the first locally produced solar modules in Austin on the roof of the nonprofit Yellow Bike Project," reads the AE press release for this week's unveiling of what is also described as "the first by AE to pilot and research leasing rooftop space from nonprofit organizations such as Yellow Bike and on commercial properties."

› "Gale Crater, I am in you." That's how NASA announced that the 1.1 ton Curiosity rover had successfully landed on Mars on Aug. 5. The lander is seen as the next stage in sending people to the red planet.