City shelter will need to do more with less

As we reported two weeks ago ("$1 Million: The Next Price Tag on No-Kill," July 27), the new Austin Animal Center is understaffed, underfunded, and underwater as a result of what Chief Animal Services Officer Abigail Smith calls "an incredible kitten season, just off the hook." We also reported that in an attempt to give shelter staff a fighting chance at maintaining its rather miraculous 90% live-outcome rate, Smith recently put in a request to City Council to add $1 million to her budget for fiscal year 2013.

Well, last week, the city's Budget Office presented its proposed FY 13 budget to Council, and it looks like Smith and her staff are going to have to continue mastering the fine art of stretching a buck. Or rather, 220,000 bucks, which is what the proposed budget is recommending: $162,000 to fund the operation of the former Town Lake Animal Center as an overflow facility, and $58,000 to convert one half-time veterinarian to full-time. So instead of 18 new employees, Smith is looking at getting one half of one.

"I'll just have to take money out of other programs' line items and move it around," Smith says. "But this is a permanent problem. TLAC is going to be an issue for three years, but right now I'll move more temps over there."

That time frame of three years refers to the length of the license agreement the city struck with Austin Pets Alive! in late April to allow the rescue group to move its operation into the old TLAC site. It was a controversial move at the time. Several rescue groups wondered why APA! was being given preferential treatment and access to city property. Other critics looked at the proposed agreement and wondered where the sense was in paying APA $120,000 to bring in animals from outside city limits (under the terms of the agreement, APA! is allowed to house animals rescued from Bastrop, Caldwell, Hays, Travis, and Williamson counties), essentially creating competition in the adoption market.

Last week, APA! turned in its first status report on its operations at the TLAC site, and things look pretty good. APA! is required to take 3,000 animals annually from the AAC's "at-risk" list; according to APA's report, the group took in 580 in June alone.

But the issue with APA! taking over TLAC was never about the group's ability to hit targeted outtake numbers; no one, not even APA!'s biggest detractors, denies the group's ability to move animals. Rather, the issue for many has been: Does it make sense for the city to pay APA! to use city-funded facilities so that the group can bring in animals rescued from outside Austin, thereby flooding the adoption market? While APA! took in 580 animals from AAC in June, it took in 723 animals total, meaning at least some city resources are going toward saving non-city animals.

The majority of those 143 animals were either born on-site or came to APA! from one of the five counties laid out in the license agreement. A few were Austin animals that were brought directly to APA!, bypassing AAC entirely. Still, there are some early red flags. On June 22, APA! took in six dogs whose intake jurisdiction is listed as Kanab, Utah. And at least four animals arrived from San Antonio, where APA! spin-off San Antonio Pets Alive! recently signed its own lucrative agreement. That means that perhaps only 10 dogs of 723 were brought in from outside the jurisdiction of the license agreement – but when Austin shelter staff are scrambling to keep Austin no-kill under nearly impossible circumstances, shouldn't a nonprofit contracting with the city be doing everything it can to help?

APA! Executive Director Ellen Jefferson promises her group is doing just that. She says those six dogs nominally from Utah were actually from Seguin. Best Friends Animal Society in Utah asked APA! to help them find homes for dogs seized from a Seguin home that was hoarding animals. APA! put a plea out to foster homes, Jeffer­son says, and when six responses came back, the rescue group took six of the dogs – which went straight to the fosters rather than to the TLAC site. Same with the animals from San Antonio, which were most likely brought north because a foster volunteer had requested a particular breed. As long as animals from outside the five-county jurisdiction don't reside at TLAC, APA! is not in violation of its contract.

Or at least not the letter of the contract. Some might argue that APA!'s actions violate the spirit of their agreement with the city, which is to make it easier, not harder, for AAC staff to find homes for the thousands of local animals looking for them.

Those concerned parties needn't worry, says Jefferson: "These numbers are inconsequential when looking at the hundreds of animals we took from AAC in June. We're careful about not bringing in too much competition. We get requests every day from throughout the state to take animals, but we don't do that. There may be one-off situations where we feel obligated to help, but we wouldn't if we didn't have capacity. There will never be an animal suffering at AAC because of us. We would always put them first." 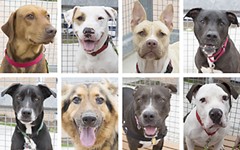 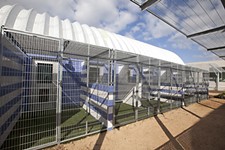