Remembrances of an election that changed Austin's political environment

A 1990 rally outside City Hall marked the start of the SOS movement. (Photo by Alan Pogue)

Twenty years ago, on Aug. 8, 1992, voters overwhelmingly passed the Save Our Springs Ordinance – a voter-driven initiative to protect Barton Springs against unrestricted development in the Barton Creek watershed.

The victory at the polls marked a turning point in local politics and created a launching pad for City Council candidates running on a green agenda. The ballot initiative was the product of a grassroots group – the Save Our Springs Coalition – that formed shortly after the celebrated all-night City Council hearing of June 7, 1990. At that meeting, more than 900 people spoke against a 4,000-acre Barton Creek planned unit development proposed by Jim Bob Moffett, CEO of Freeport McMoRan, a chemical and mining conglomerate with one of the world's worst pollution records.

The hearing lasted until dawn the next morning, ending with the council's unanimous rejection of the PUD.

Environmentalists fought back with the formation of the Save Our Springs Coalition, whose members included leaders of the Save Barton Creek Association, the Austin Sierra Club, Clean Water Action, and other green activists who crafted the SOS ordinance to limit the amount of development allowed within the Edwards Aquifer recharge and contributing zones. The group kicked off a petition drive that gathered more than the number of signatures required to force the SOS Ordinance on the ballot in time for a May election.

But the RULE council first refused to set the ballot, and only after a lawsuit set the election date for August. The three-month delay gave builders time to file development plats affecting thousands of acres in the watershed. RULE also placed on the ballot a weaker watershed ordinance supported by the Chamber of Commerce and real estate and business interests.

The pitched battle divided the community: On one side was the SOS Coalition, Aus­tin Business Leaders for the Environment, and Making Austin Stronger. MAS, led by minority leaders Eliza May and Ron Davis, was formed to counter Eastside minority group Save Our Neighborhoods, which Circle C Developer Gary Bradley bankrolled to try to spread the message that SOS stood for "segregate our society." The primary anti-SOS group was called Citizens for Responsible Planning, largely financed by homebuilders, large engineering firms, and others who stood to profit from the Barton Springs PUD and other developments that would follow. "Moles" within CRP – in reality, staff members who sympathized with the environmental effort – would periodically pass inside information to the SOS Coa­li­tion about the opposition group's game plans.

Election day garnered one of the highest turnouts in local political history – 27.6% of registered voters. When the votes were tallied, SOS had won a 64% victory, while the competing RULE ordinance received just 35% of voter support.

We asked several people who played important roles in the SOS campaign to share their thoughts about this landmark event. Their reminiscences appear in "Memoirs of a Movement."

Beside the Point
Tragic Kingdom 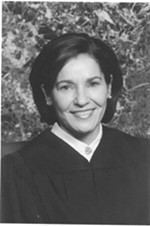