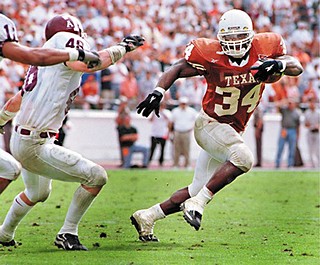 Last week my RosterWatch.com co-host Byron Lambert and I sat down for an interview with Ricky Williams, Gary Douglas, and Douglas' partner Dain Heer. In a press release, they had asked for help in getting their message out regarding the work of the Ricky Williams Foundation, then in progress in Austin at a student camp run by Williams. I walked into this interview thinking I would come out with a fluff piece about one of my all-time favorite football players – but it didn't quite turn out that way.

Douglas is the charismatic, occasionally even spellbinding founder of Access Con­scious­ness, a California-based consciousness-raising ("mind-healing") organization with members – known as "accessories" – in 38 countries. Douglas claims he can heal the injured with his bare hands, teach others how to read minds, and even speak with molecules, among other things.

Some call Access a movement; others call it a cult. It is not hard to find scathing remarks regarding Access methodologies online – some from individuals claiming real-life experience within the organization. The group's teachings are based in "freedom from judgment" in our conscious experiences. This idea manifests itself in many ways, including an emphasis on sexual freedom.

According to Williams, in December 2011, he thought his foundation had secured substantial funding from a private charity, to the tune of $32 million. He believed that the group donating the money shared his values about the importance of helping underprivileged children understand they have choices in life and could always aspire to be great. (Presumably that's the message Williams believes he and the foundation are bringing right now to Austin children.) But the anticipated funding never came through – according to Williams, due to his retirement from football, the charity lost interest in him as a potential connection to other NFL players.

Earlier this year, Williams had been contributing his own money to the program, with the expectation that his foundation would be receiving the $32 million. When those funds fell through, as the men tell the story, Douglas and Access arrived to help. Together, Douglas and Williams concluded that Wil­liams – although he had never been taught directly – was indeed unknowingly practicing Access Consciousness. As Williams now sees it, Access follows the model of his whole foundation's program: Give the kids a choice, and free their minds.

Williams says he's become an accessory of the Access movement, and the mission of his foundation has been transformed into an outlet for delivering the controversial teachings of Access Consciousness to the underprivileged children who attend his camps – including the latest one, held at Sims Elementary in the Austin school district. An AISD spokesperson told the Chronicle that Williams' foundation has visited both Sims and Pecan Springs over the last year, having approached the school principals directly for permission. However, the group did not get the approval of the AISD Facilities Department before their visits, said the spokesperson, nor has it submitted the required paperwork, as required by district policy. AISD says there are no further visits scheduled, as no formal request has been submitted.

According to Douglas and Williams, Access Consciousness is now a significant contributor to the Ricky Williams Foundation and is also underwriting much of the cost of the camp by livestreaming the event to devout accessories all over the globe. (According to the Access website, replays of live streams can sell for upward of $1,200.) Williams was the camp's instructor last week for Level I of the course. The men say this is the first time this method has been taught to children in a group setting. "Advanced" levels II and III will be delivered to these children by the person whom accessories all over the world call their "fearless leader": Gary Douglas himself.

Whatever Douglas and Heer may think they're doing, Williams at least appears to be a true believer in Access Consciousness. For myself, I left the interview thinking just three words: "Run, Ricky. Run."

The entire interview with Williams, Douglas, and Heer is posted online at RosterWatch.com. Douglas and Heer describe Access and its methods in detail, and Williams covers many topics. A few excerpts follow.

Douglas on teaching the children: "I teach them how to be aware of what they are aware of, and how to take answers out of other people's heads when they take tests and stuff so they can all get A's and B's instead of C's and D's."

Douglas on a victim of childhood sexual abuse: "She goes, 'Yeah, I got the fucker." She came to the awareness that in some other lifetime, she swore that she would kill this guy, and, he was her cousin in this lifetime, and she had gotten him to have sex with her and told the family so he got kicked out."

Williams on Access Consciousness: "The difference I have found with Access is, it's really just an energy ... it's that place where you're just like, 'OK, there's got to be something better than this,' and you start to ask questions and things show up in a different way."

Williams considers if he had discovered Access as a child: "If I was aware of all the things that I enjoyed to do, and all of the capacities that I had, I might have chosen something different, and I would have been able to create even more."

Douglas on helping the Ricky Williams Foun­da­tion: "When they took away [Williams'] funding because he wouldn't do what they wanted, fuck 'em. I will find a way around this, and I will find somewhere to get the money."

Douglas on touching a woman with a dislocated shoulder and fractured ulna (and his healing potential for NFL players): "She goes to the hospital the next day, to her surgeon that she knew personally, and the guy says, after looking at the X-rays, he goes, 'My God! What happened? It looks like somebody already set this.'"

Alex Dunlap (@AlexDunlapNFL) is a member of the Pro Football Writers of America, the host of RosterWatch on ESPN Radio Austin and San Antonio, founder of RosterWatch.com, and featured NFL columnist for Bleacher Report.