Memoirs of a Movement

Remembering the campaign to Save Our Springs 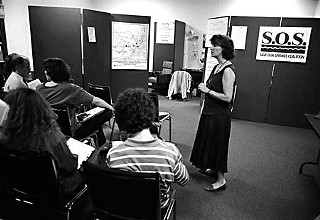 Co-founder and director of the SOS Coa­lition; elected to City Council in 1993, served one term; this year she ran unsuccessfully for mayor and remains active in environmental causes

Imagine if none of us knew the story of David and Goliath. We'd have no analogy for the triumph of the little guy – the underdog defeating the giant. For many of us, the story of SOS and the saving of Barton Springs is our town's version of David and Goliath. And one of the most remarkable things about it is how little it's told. As we approach the 20th anniversary of Austin's epic battle to Save Our Springs, I look forward to the fleshing out of this amazing chapter in our history. Regardless of which side you were on, you have to admit, it's one hell of a story.

The "David" in this case were the ordinary citizens of Austin, a few political consultants and the leaders of several environmental groups, who just wanted to save Austin's rare environmental jewel, Barton Springs. The "Goliath" was Jim Bob Mof­fett, ex-UT football player and CEO of Freeport McMoRan, an international mining company that owned the world's largest gold mine. Literally. His plan to develop on the banks of Barton Creek threatened to pollute the Springs.

The story is complete with Moffett's chest-pounding at the city council meeting where he proclaimed that he had the highest grades of anyone at UT (wait for it) ... on the football team. And how he'd parked his lavish RV cocktail lounge outside the back door of the old council chambers, presumably to further underscore his belief that he owned the place. Until the citizens started rocking the RV back and forth and Moffett and company had to flee.

In the end the citizens triumphed, defeating power and money by passing the SOS Ordinance by a 2/3rds margin in one of the highest turn-out elections in our history.

If you want to hear the amazing details of what happened in between, come to the Springs, under the tent by the back gate, for a watermelon social and great story telling, this Tuesday and Wednesday, Aug. 7 and 8. 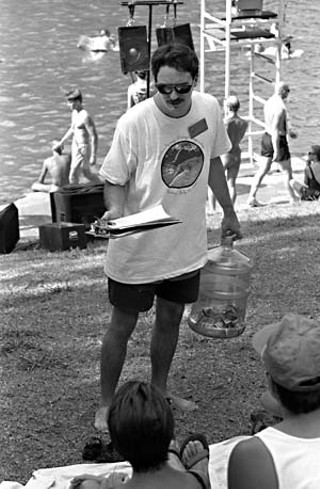 SOS leader Bill Bunch, armed with a clipboard and a money jug at Barton Springs Pool, 1994 (Photo by Alan Pogue)

In launching the SOS initiative, a dozen or so Austin activists sought to defend Barton Springs from the likes of Jim Bob Moffett and others in a long line of growth-at-any-cost corporados. We also sought to give direction to the passion for Barton Springs shown by so many Austinites from all walks of life. Between the June 7, 1990 all-night Barton Creek PUD uprising, and the August 8, 1992 SOS vote, thousands of people volunteered time, money, heart, and soul to save our springs.

Young and old, rich, poor, and in-between phoned, walked, stuffed envelopes, and, most importantly, learned about Barton Springs and what it takes to prevent the growth of Austin from destroying the springs that gave birth to our community.

Enlightened local business leaders helped debunk the Chamber/Real Estate Council argument that protecting Barton Springs would kill job growth with the simple and opposite message – that "SOS is good for the economy." And, of course, it has been good for the economy, more so than anyone at the time ever imagined.

The Austin Chronicle and its writers Daryl Slusher, Scott Henson, Robert Bryce, and others set the record straight every week for months on end once the "RULE" council succeeded in postponing the election from May until August. The music community, led by Jerry Jeff and Susan Walker, Bill Oliver, Joe Ely, Eric Johnson, Marcia Ball, Kim Wilson, the East Texan, Don Henley, and so many others, gave more than you can imagine to the effort. Dean Rindy's TV commercials and compelling 14-minute video sealed the victory on election day. (Watch the video at www.sosalliance.org.)

Twenty years later, the fate of Barton Springs still remains up for grabs. Water quality has deteriorated, but not near so much as it would have if the tide of growth had not been shifted away from the Barton Springs Edwards Aquifer watershed. Now we understand that the pressure to pump more groundwater to serve growth in the Barton Creek, Onion Creek, and Blanco River watersheds threatens to drain the springs during times of prolonged drought. The powers-that-be at City Hall and Downtown have been more supportive of protecting Barton Springs since the SOS vote, but there is still not enough action to go with all of the talk about "green" Austin.

As Edward Abbey, the Thoreau of the Southwest, once wrote, "Sentiment without action is the ruin of the soul." Protecting Barton Springs has always, in part, been about more than just the springs. It's also about saving our city from the temptation of the fast buck at the expense of the future. It's the story of our time. We may be "thinking globally," but we aren't "acting locally" near enough. Civic engagement has declined significantly. It really does take a community to save a community. 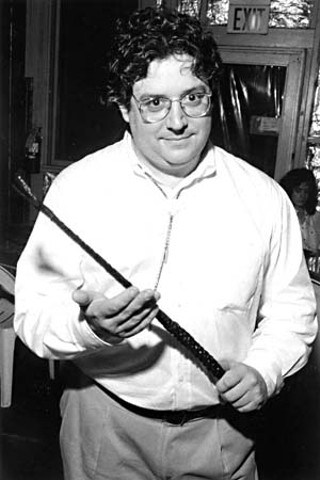 It was obvious that SOS was something special when I saw a giant pink blow-up King Kong holding an SOS banner on top of Pinkies at Congress and Riverside. I knew we had made it.

Maybe it shouldn't have, but the size and intensity of the campaign came as a surprise. What began as an idea in Shudde Fath's living room became a wave that has washed over much of the city's political discourse for the last two decades. I never thought – in fact it was beyond my hopes – that the wave would last this long. A lot of credit goes to Bill Bunch and all the people who have kept it alive.

Council Member Gus Garcia's role in SOS is not well-known. I was his aide in the days before SOS began. On one particularly long day, a succession of environmentalists came through the office – all with different ideas of how to address the existing watershed ordinance. Listening to them, it was obvious that there was no center and no clear strategy. Because of this, Gus challenged me to think how the environmental community, in his words, could sit across the table from the development community as equals. In some part that was the genesis of the initiative idea.

Few public issues in recent Austin history have permeated the community so deeply. Daryl Slusher's columns in the Chronicle, Statesman stories, daily TV coverage – there was an amazing amount of press that helped establish the central importance of water. The Chronicle deserves a tremendous amount of credit – because a movement that is not reported doesn't happen.

I believe we all owe a debt of gratitude to the thousands of people who created their own SOS campaign in a thousand different ways. SOS also brought together political talent: David Butts, Dean Rindy, Jeff Smith, and Robert Hernandez, among so many others who brought a wealth of skills that all the money in town couldn't beat.

But a cast of thousands also meant personal, cultural, and political differences. There were many painful moments during the campaign, but none more so than the decision by the RULE council that resulted in grandfathering thousands of acres for decades to come. Our community will suffer greatly because of their moral failure.

The battle for Barton Springs and SOS set the framework for many of the struggles we have had over the last two decades, and most likely will have for the next two. Because it was and is about how we protect and create a better quality of life for the people of our community. We won't know the outcome of this battle in our lifetime.

How did it feel? Some elation, some exhaustion, and some pain – anything difficult that has value contains those things. 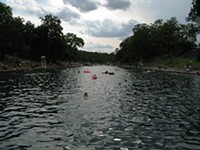 Then There's This: Longing for the Future
For better or worse, SOS was a political game-changer